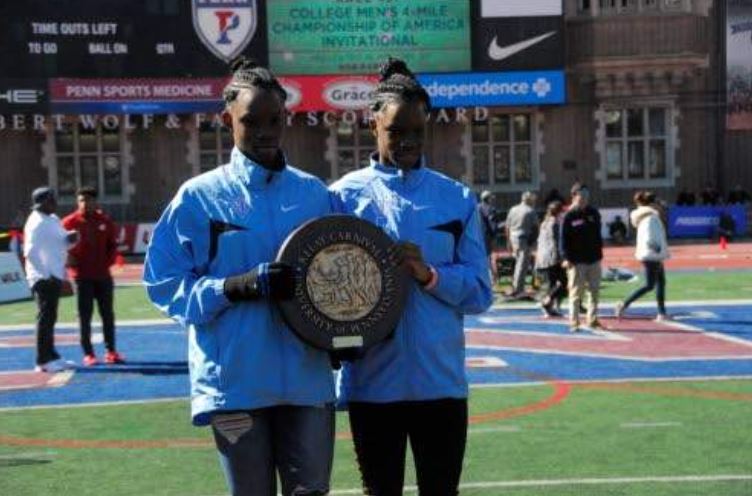 Via the Jamaica Observer

Tia and Tina Clayton are currently the two fastest 14-year-olds in the 100m and 200m events.

The Edwin Allen High School twins, who ran at their third ISSA/GraceKennedy Boys' and Girls' Championships this year, have become household names in high school track and field despite their tender age. They finished first and second in both the 100m and 200m with Tina winning the 100m and Tia, the 200m, before they joined forces to claim gold in the 4x100m.

Tina has the fastest time of 11.27secs, while Tia is just behind her sister with 11.32secs.

But before they commanded the attention of thousands of track and field fans the way they do now, Tia and Tina got their start in the sport at the annual JTA/Sagicor National Athletics Championships, which they participated in for four years.

They both had rivals that they feared when they just started out at the meet.

Tia recalls crying before a race in her second year.

“I was crying because I didn't want to run because there was a girl in the race that was faster than me and I wanted to win. She was bigger and very fast.”

“I always wanted to go to the National Stadium and run and the first time I did, I won the 100m and 200m and it was great,” Tina recalls.

The fact that they both idolise Shelly-Ann Fraser-Pryce should come as no surprise to anyone, as they compete in the same events as the Jamaican World and Olympic champion.

Tina says her admiration for Fraser-Pryce comes from the fact that Shelly-Ann never gives up, and she motivates the young girls who are up-and -coming in track and field to do their best.

One of the most important lessons Tina has learned in life so far, she says, is, “If you want to be an athlete, you must not give up at any time in life and you must always listen and work hard.”

While Tina admires Shelly-Ann, Tia wants “to be the next Shelly-Ann in the future”.

Tia believes that she is currently inspiring athletes who are younger than her.

“Children will come up and 11.27 will be nothing to them, they will be a lot faster.”

The close bond the twins share is very evident when they compete and have hopes of becoming Olympic champions in the same events.

Their coach at Edwin Allen, Michael Dyke describes them as “phenomenal”. Having trained them from day one in high school, he says their progress has been remarkable.

Describing the duo as “charismatic and assertive” Dyke said, “They train very hard, are disciplined, competitive, and once they remain focused and injury free, I am very confident that they will represent the country at the highest level for both juniors and seniors and win races too.”

The JTA/Sagicor National Athletics Championships will be held today and tomorrow at the National Stadium, starting at 10:00 am each day.