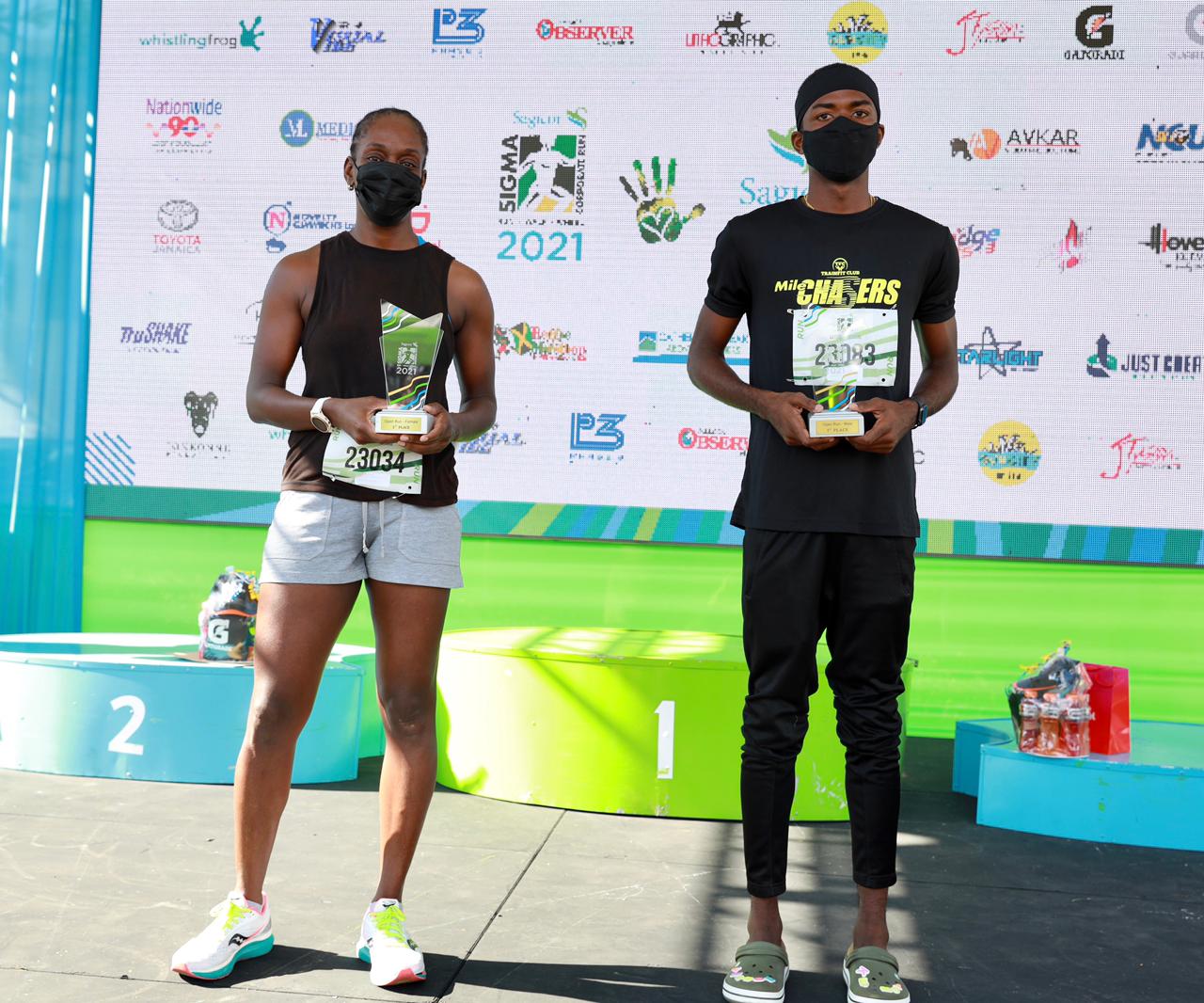 Despite not hosting the usual 25,000-plus participants in the streets of New Kingston due to the novel coronavirus pandemic, the special Sigma Run Invitational was by no means short of excitement, even with health and safety protocols in place.

According to the organisers, this year's Sagicor Sigma Corporate Run was staged as a hybrid event and saw the majority of the participants running in their own private spaces in a special invitational run. In total, 36 females and 45 males started in two separate races 40 minutes apart. In addition, eight wheelchair participants started in their own race.

Sagicor's core mission is to improve the lives of the people in the communities in which it operates, and therefore, the company's major reason for conceptualising a hybrid execution of the Sigma Run was to support both the health system, which is at the centre of the nation's response to the COVID-19 threat and the education system that is still facing challenges to get back on track.

While this year's staging of the event was virtual for the most part, organisers were once again left happy achieving a figure just over $42 million for beneficiaries – Annotto Bay and Port Antonio hospitals and the Get Back on Track Education Programme.

The organisers also received the endorsement of the Jamaica Amateur Athletics Association, which wrote to the Ministry of Sports on its own accord, endorsing the Sigma Run Invitational.

All protocols were rigorously followed under the supervision of the relevant authorities who were present to ensure compliance. And though the participants were allowed to run without their masks, health officials posted just beyond the finish line ensured that the face coverings were refitted upon completion of the run.

Both Venson, of Trainfit Club Mile, and Harris, of Jamdammers, proved too good for the competition on the revised course which took participants around New Kingston twice to make the total distance of 5.5K.

Venson, who has been a standout for Calabar High School in the 1,500m and 5,000m races at the Inter-secondary Schools Sports Association/GraceKennedy Boys' and Girls' Championships over the years, stormed his way to pole position in the open run category, which was based on net time, due to the social distancing at the start.

“It feels good to come out here and win, achieving a fast time; this is just a testament of the hard work I have been putting in and so it was just a matter of coming out and executing. The course was a bit difficult because this is my first time participating at Sigma and it was a lot of corners, but I was able to manoeuvre them well,” Venson told the Jamaica Observer.

The 19-year-old also shared his thoughts on the protocols that were in place for the run.

“It is a 5k run and the fact that you had to put on your mask shortly after finishing means you hardly had time to catch your breath, but we worked through it healthy and happy, which is all that matters,” he added.

Meanwhile, Harris, formerly of Sun Island, who was third for the past two years, finally finished tops in 23 minutes and 31 seconds, ahead of the unattached Shenell Simms (25.08 minutes) and last year's runner-up Arieta Martin (27:41 minutes) of Rainforest Seafood.

Harris, who is a recreational triathlete, welcomed the return of road racing, and by extension the resized version of the event, which she believes resulted in her comfortable win.

“First off, I am happy to be back on the road and I am thankful to Sagicor for pushing for this to make it possible.

“I actually prefer it this way, because I don't like crowds, so it was good to be in a smaller space and having to be physically distanced. Wearing the mask was no issue, because we know we have to be safe, so we had to be fully compliant,” she told the Observer.

“The course was a bit challenging; there were a lot of turns which made the run a bit harder, but generally speaking it was fine and it was good to be back having fun among great company, and we look forward to when things like these return to normal,” the 40-year-old noted.

In the wheelchair category, Navardo Griffiths successfully retained his title in 24 minutes and 28 seconds, ahead of Marcus Banton (32:11 minutes) and Joel Brown (53:51 minutes).

Sashagaye Thompson also retained her title in (37:17 minutes), with Vinnette Green (46:23 minutes) improving her third-placed finish last year to second, while her daughter, Sasha McKane (49:04 minutes) was third.
Only the top long-distance runners in the country were invited to participate in this event and their invitation was considered as a means of assisting established athletes to start their season (as track and field events have been safely reopened in countries around the world) and youth athletes to be able to submit their most current race times to accrue scholarships or maintain the scholarships they already possess.

Additionally, the rigorous approval process to be able to execute the invitational run was quite detailed as multiple bodies needed to grant permission for its staging. Race managers of the Sigma Corporate Run, Running Events Jamaica, first wrote to the Ministry of Culture, Gender, Entertainment and Sports with a proposal which was approved based on the protocols presented. The proposal was then sent to the Office of Disaster Preparedness and Emergency Management and approval was granted. Subsequently, the Jamaica Constabulary Force approved, followed by the National Works Agency, which granted approval for the use of the roads. The Kingston and St Andrew Municipal Corporation was then able to issue the organisers with a licence to proceed. The Ministry of Health and Wellness also gave its approval and endorsement based on the protocols in place.

For more information on the Sigma Corporate Run click the link below: