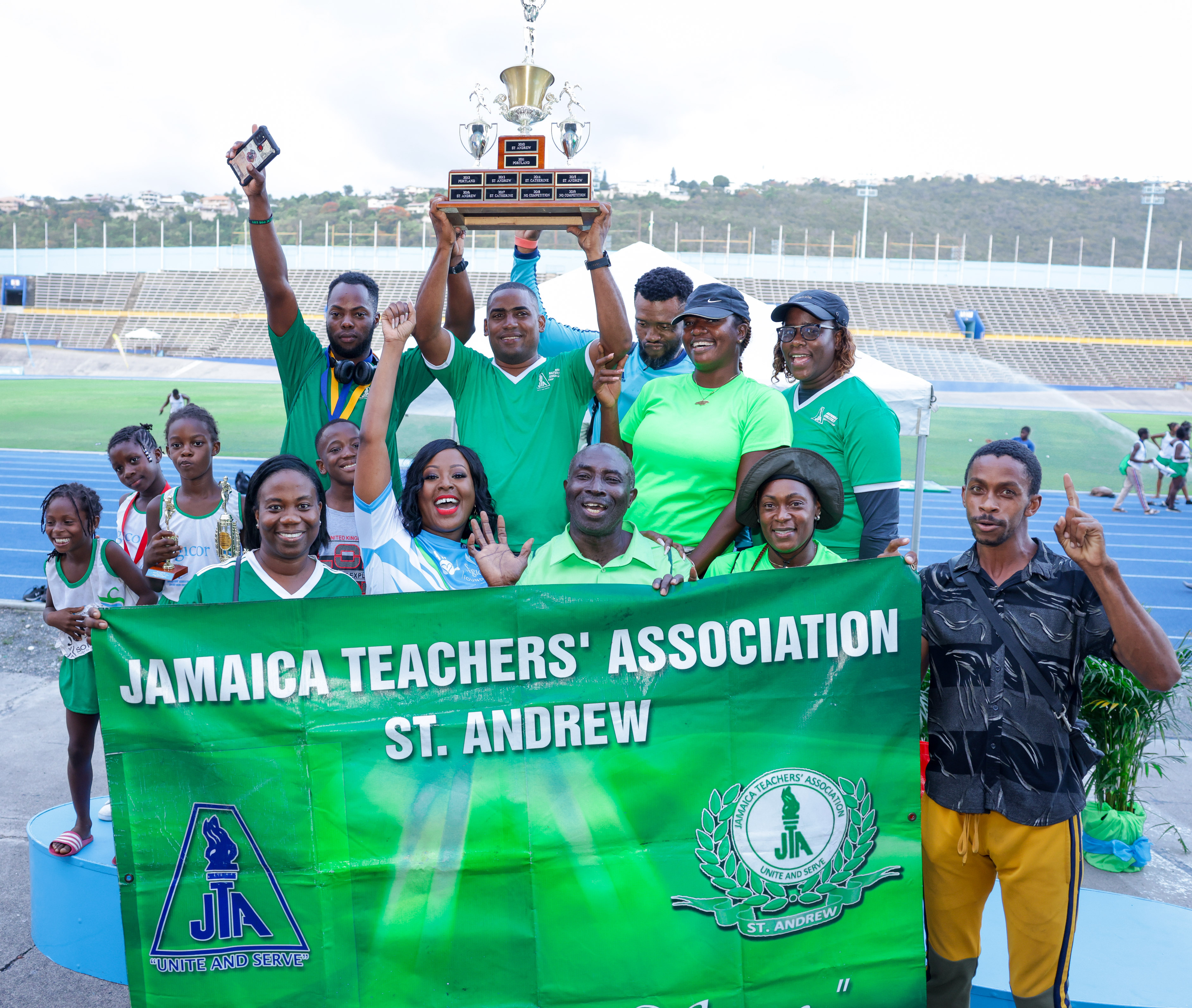 Kingston, Jamaica – Two-time defending champions St. Andrew retained their title with 272.5 points as the Jamaica Teachers’ Association (JTA)/Sagicor National Athletic Championship came to an end on Saturday (June 11) at the National Stadium. This was the teams 21st time lifting the championship trophy in the 37 years that the meet has been held.
Closely trailing them for a shot of their first title win were St Thomas, who were 16.5 points behind on 256 after all 50 finals were completed. In third place were three-time championship winners St Catherine on 194 points, followed by St Elizabeth on 186 points.  The athletes from Kingston rounded out the top five on 165.5 points.
Mabracq Harris, St Andrew parish coordinator said he expected the intense duel against St Thomas and St Catherine for the title, but was nonetheless confident in his team’s ability to pull of the three-peat.
“I knew this would be a three-parish battle with St. Thomas and St. Catherine, but with grit and determination we prevailed,” a jubilant Harris shared at the close of the event on Saturday. “I was confident coming into the relays, but we had some injuries in the 100m and 200m which made me a bit nervous. Kudos to my coaches for their hard work. This one is for our JTA St. Andrew Parish President!”
JTA President Winston Smith expressed in his address at the official opening ceremony of the championship that he is impressed with the quality of athletes at the meet after its two-year hiatus due to the pandemic.
“This grassroot championship has unearthed many talents that have served Jamaica well in the past, and are still serving Jamaica well,” Smith noted at the official opening ceremony. “COVID-19 has put a damper on the championship over the last two years, but I’m happy that today we can carry on the activity that is a household name in Jamaica.”
The overall champion girl from the meet, under-nine sprinter Judah-Kay Pitt, was from the winning parish, while St Thomas under-13 sprinter Mario Ross and Westmoreland under-15 sprinter Jahleel Matthews were tied as Champion Boys of the meet on 18 points.
In addition to its sponsorship spend of over $10 million for the hosting of the meet, title sponsor Sagicor Foundation has also committed to secondary tuition scholarships to the champion athletes. Sagicor also contributed a cash prize of $100,000.00 to the parish with the most supporters at the stadium. This was copped by St Elizabeth.
Alysia White, Executive Director, Sagicor Foundation, congratulated St Andrew on their dominance in the event, and thanked the JTA for its dedication to students’ holistic development.
“The Sagicor Foundation commends the JTA for their perseverance in building on the legacy of this meet each year, and in so doing helping to create opportunities for our children to achieve their best both in and out of the classroom,” White said. “We wholeheartedly thank the JTA sports committee, coaches, parish coordinators, principals, teachers, parents, sponsors and the entire JTA body for its unending dedication and support of the Championships. The positive impact that the JTA/Sagicor National Athletic Championships has had on the lives of youth athletes, their families, schools and communities cannot be overstated, and Sagicor is always happy to support this initiative.”
This year’s staging of the meet was also sponsored by the JTA Co-operative Credit Union, Milo, Gatorade, National Baking Company and the Jamaica Observer.

About Sagicor Group Jamaica
Sagicor Group Jamaica is a financial services conglomerate.  The Company commenced operations in 1970 as Life of Jamaica Limited,  the  first locally owned  life  insurance  company  and  the  first life insurance company to be listed on  the  JSE. The Group offers products and services in the areas of Banking, Insurance, Investments, Real Estate, Asset Management and Retirement Planning.  Sagicor Life  Jamaica  Limited  is  the  leading  Life  and  Health  insurance provider in  Jamaica; the Bank is one of Jamaica’s largest banks, and Sagicor Investments is one of the top Investments companies in the Country.   Sagicor Group Jamaica is a member of the wider Sagicor Financial Corporation. Sagicor Financial Corporation operates in over 20 countries and its operations date back to 1840.
- END-
For further information, please call Michelle-Ann Letman at 876.936.7838; 876-818-6204 or email [email protected]
Sagicor Group Jamaica, 28-48 Barbados Avenue, Kingston