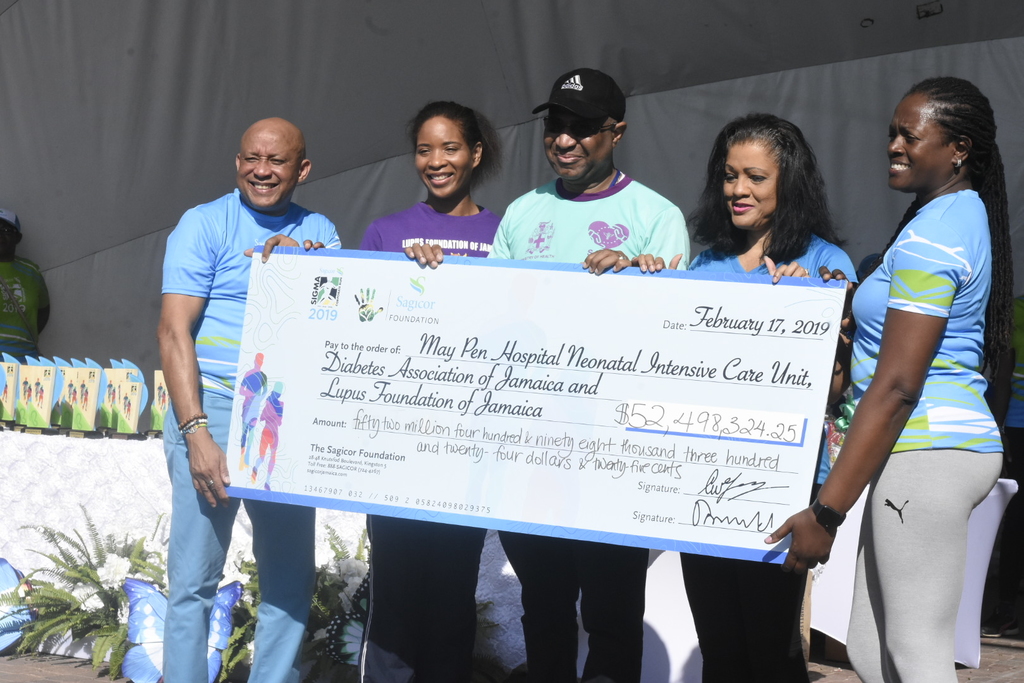 The Sagicor Foundation through its SIGMA Corporate Run initiative has highlighted that within the last 21 years since inception, the company's signature charity event has managed to raise more than $400 million benefiting some 30-plus health and educational institutions islandwide. The run, which has significantly increased the amount raised over the years, with increments surpassing up to two times more than the previous year, has seen totals grow from $21 million in 2014 to $50 million in 2018. Last year's staging racked up some $52.4 million in cash and kind which was used to give support to beneficiaries in the health sector.

The Sagicor Foundation, which is the philanthropic arm of the Sagicor Group, has indicated a $50-55 million fund-raising target for this year's 22nd staging, which they say will go towards institutions that are in dire need of financial help.

Speaking at a launch event held on Wednesday at the Spanish Court Hotel in New Kingston, R Danny Williams, chairman of Sagicor Foundation, said though a company-funded initiative, all the proceeds from the event will go towards the respective beneficiaries.

“Sagicor undertakes all the expenses and overheads to execute the run and all associated activities. All monies raised/donated leading up to race day contribute to the total funds for the beneficiaries.

“The past two decades have been a truly remarkable journey for the SIGMA run. Since the staging of the first SIGMA Run in 1999, the charitable cause has raised over $400 million, which has contributed to purchasing numerous critical medical equipment for many hospitals across the island, which has helped in saving many lives, especially some of our most vulnerable — our children and premature babies,” he shared.

Sagicor Group President and Chief Executive Officer (CEO) Christopher Zacca added that though the company is very big on its corporate social responsibility (CSR), the SIGMA Corporate run represents much more than that for them.

“A big part of our company's vision is to give back to the communities we serve and SIGMA Run is the premier event in our CSR. It really represents who we are as a company; it defines what Sagicor Jamaica is. It is therefore more than just CSR for us; it's actually a part of our culture— our family. It is a part of our life blood at Sagicor,” he said.

He adds that the event does not only add financial value as it also helps to strengthen teamwork and build networks and partnership.

“It builds teamwork within; it creates a sense of family value, that we are all a part of the team giving back to communities. Our clients also appreciate the fact that they are a part of a company that is giving such wonderful service to the communities in Jamaica, I think all around its win-win-win,” he stated.

The event, which is said to be the largest road race in the Caribbean region recording over 27,000 participants to date, is highly anticipative of more people coming out for its 22nd year to run, walk, wheel for a good cause.

Proceeds from this year's event will help to bolster infrastructure and resources at two hospitals and a boy's home.