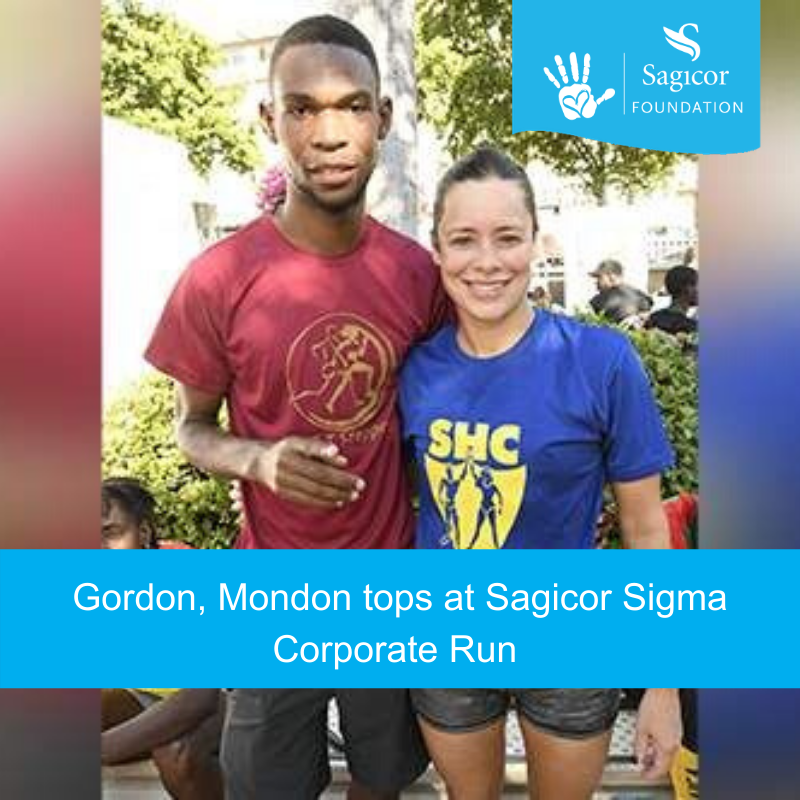 After missing the 2018 and 2019 editions, Garfield Gordon returned for the 22nd staging of the Sagicor Sigma Corporate Run in fine knick to top the men's open run category, while triathlete Elisabeth Mondon successfully retained the women's honours yesterday.

Both Gordon of UCT Steppas and Mondon, representing Spartan Health Club, were among the 26,014 registered participants who flocked the streets of New Kingston for the annual run, walk and wheelchair 5K event which continues to exceed expectations.

While the turnout was nowhere close to the 27,028 participants of last year's staging, organisers were once again left happy achieving another record-breaking figure of $55.3 million for beneficiaries – Bustamante Hospital for Children's Special Care Nursery, Clifton Boys' Home, and Savanna-la-Mar Hospital. The figure surpassed their previous best of $52.4 million from last year.

Gordon, who finished second when he last competed on the Sigma circuit in 2017, produced a breathtaking performance to sweep by invited guest participant Joshua Hunte of Barbados and grab pole position in the open run category, which is based on the best gun time and includes all registered runners.

This victory for Gordon followed his convincing showing at the Crystal Spring Run earlier this month as he stopped the clock in 16 minutes and 57 seconds, slightly slower than the 16 minutes, 24 seconds clocked in his previous run.

“I am elated. It feels good to come out here and win because the last I ran I came in second; words can't express how happy I am at the moment. Normally a road race is not challenging for me but this one was challenging because there was a new face and it was good that he pushed me,” Gordon told the Jamaica Observer.

“So it was a good run, and coming into this race to have someone push me was good for my preparation because I am looking forward to run at the Cross Country trials in Canada later this month. So, we need more runners like that in Jamaica so I can run faster times,” he added.

Hunte, who was a first-time visitor to the island, welcomed the experience after winning an event in his home country which earned him sponsorship for participation here at the largest road race in the Caribbean.

“It was very nice — the atmosphere was very superb and I really enjoyed myself out there on the course. The hardest part for me was the last 500 metres of the race. I was expecting to complete the 5K and I did everything in my power, but I had nothing left at the back-end of the race and felt like I hit a wall.

“But I got a personal best here and I am very happy about that. I am grateful that I could be here for this great initiative for a worthy cause because I have never seen so much support in one Caribbean island for one event, and I am definitely looking forward to next year if I'm flown in,” Hunte said with a laugh.

Meanwhile, Mondon, who hails from the tiny French island off the coast of Madagascar called Réunion, and who arrived in Kingston back in 2007, has over 10 years' experience as a triathlete, with her class once again displayed yesterday.

The 40-year-old completed the journey in 22 minutes and 44 seconds, over a minute slower than her winning time of 21 minutes and 28 seconds last year.

Still, the veteran was pleased with the victory as she continues her preparation for qualification to represent Jamaica at the Triathlon World Championships in New Zealand later this year.

Mondon, who represented Jamaica in triathlon at the 2014 Commonwealth Games, won ahead of Arieta Martin (23:09), while Sun Island's Jozanne Harris (23:45) secured a second-consecutive third-place finish.

“I am a bit slower than when I won last year so I am slightly disappointed by that, but it is still a great feeling to win. It doesn't get any easier each year because though I am a triathlete I run less, and so about two or three weeks before a race I focus more on the running,” said Mondon, who will be in action in Puerto Rico next month.

Duwell Allen was also successful in defence of his Open Walk title as he won in 30 minutes and 23 seconds, again finishing ahead of Lenworth Hunter (31:46) of Kingston Freeport Terminal and Gladstone Johnson (32:24).

Olivia McKoy, who was second last year, finished tops on the women's side in 35 minutes and 57 seconds, ahead of Paula Sinclair (36:57) of UCT Steppas, and Natasha McKenzie (37:29).

In the wheelchair category, Navardo Griffiths (21:47) turned the tables on Paralympian Alphanso Cunningham (23:55) in the men's category, with Shane Simpson (34:25) finishing third.

Sashagaye Thompson (23:52) also turned the tables on another Paralympian Sylvia Grant (30:48) in the women's section, with Vinnette Green (36:11) again in third.