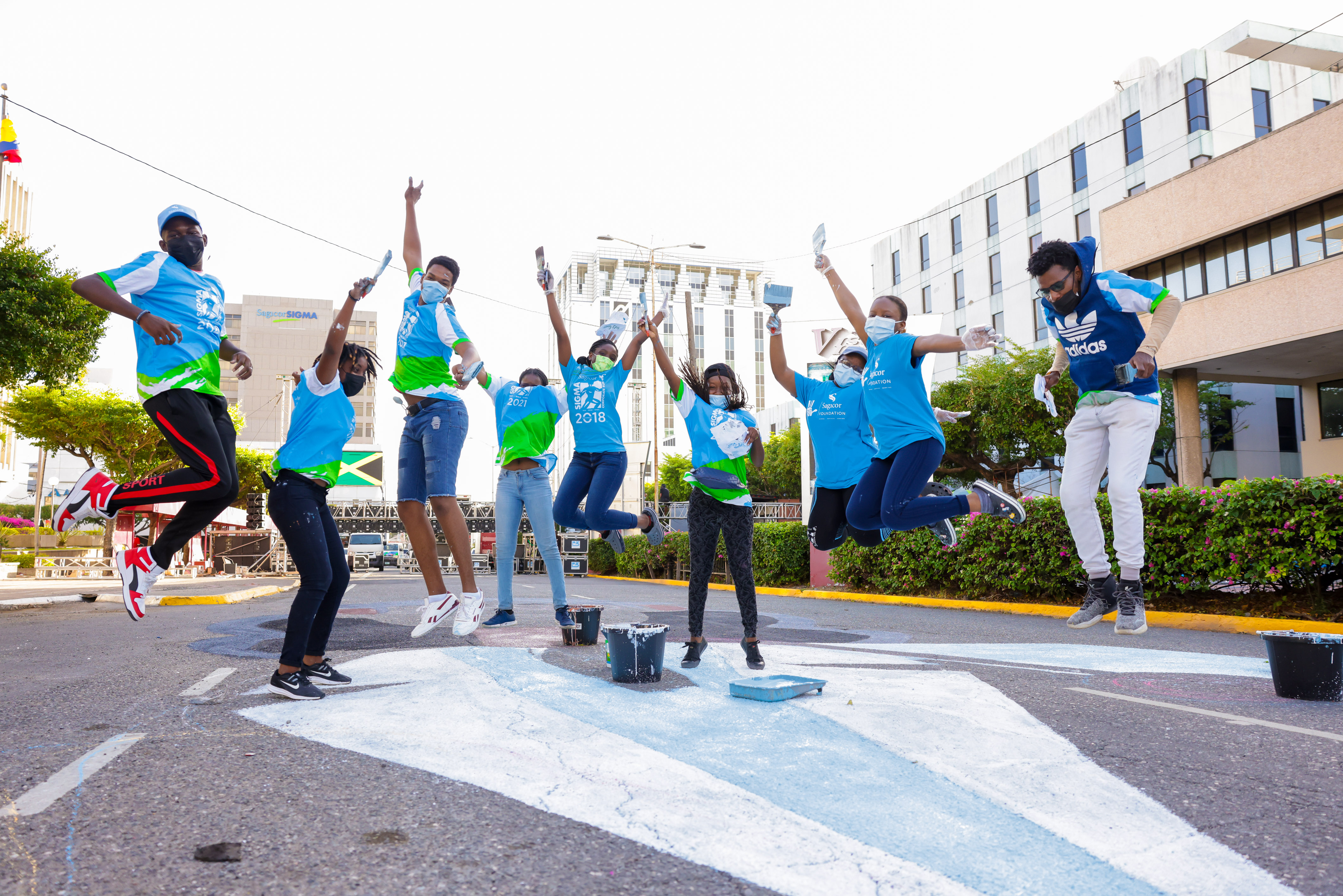 Edna Manley art students and graduates paint for a cause; lend talent to Sagicor Sigma Run mural in honour of health care workers

Students and graduates of the Edna Manley College of the Visual and Performing Arts have, for the third consecutive year, lent their skills to paint the mural that has become a signature part of the Sagicor Foundation’s annual Sigma Corporate Run.

The honourees of this year’s painting were healthcare workers at the Kingston Public Hospital (KPH) – the 2022 Sigma Run beneficiary – as well as the wider health care community who have been at the forefront of the fight against COVID-19.

The team from the Edna Manley College was supported by Sagicor Foundation volunteers and Sagicor Group Jamaica team members in bringing the mural to life. The colourful painting was among the major highlights at the 24th staging of the charity run, which was, for the first time, held on two days - Sunday March 13 and 20 in New Kingston.

Alysia White, Executive Director of the Sagicor Foundation, said the illustration is a nod to the men and women who have been working tirelessly to keep the nation healthy, particularly those at the KPH – the sole beneficiary of over 52 million dollars raised through Sigma Run this year.

“This year’s mural was designed to remind participants in the Sagicor Sigma Run events, as well as motorists and pedestrians who traversed the area, that Sigma Run is all about the cause”, White said. “Our healthcare workers at the KPH, and all across the island continue to make tremendous sacrifices for our country every single day, even with limited resources, and we wanted to honour them a big way”, White added.

The mural was conceptualised by the Sagicor Sigma Run committee, designed by Shaneille Bramwell, Graphic Artist at Sagicor Group Jamaica, and sketched by the team from Edna Manley College, which was led by Rohmearo McFarlane. The other artists who brought the mural to life were Malique Johnson, Nino Cherington, Sasha Porter, Petrena Pettigrew, Bryton Brown and Sheldon Green.

Coleen Douglas, Marketing and Communications Director at the Edna Manley College of the Visual and Performing Arts, said that the students and graduates of the institution are delighted to be a part of the mural execution for the Sagicor Sigma Run every year since they started.

“Sagicor's commitment to country and its celebration of the nation's creativity is well admired,” said Douglas. “Our students are taught to express themselves authentically and make a difference in the world with their art, and that is exactly what they do each year when they give of their time and talent to the mural artwork. The Sagicor Sigma Run changes and impacts lives so positively, and so working with the Sigma Run team is a way for students to give back to society and make an impact with their art”, she added.