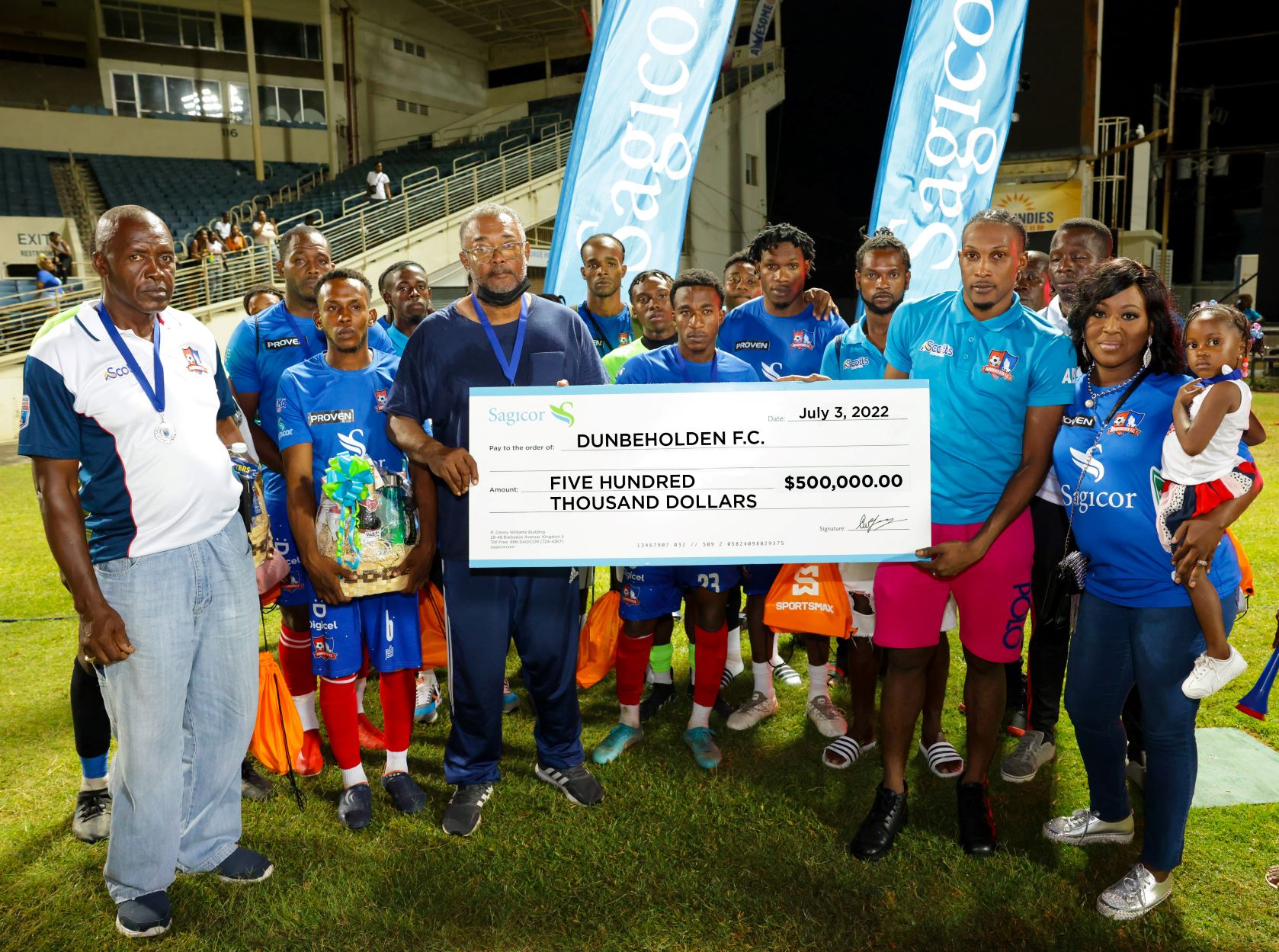 Dunbeholden FC awarded $500,000 from Sagicor Jamaica to assist with next season’s title run.

Dunbeholden FC awarded $500,000 from Sagicor Jamaica to assist with next season’s title run.

Dunbeholden FC awarded $500,000 from Sagicor Jamaica to assist with next season’s title run

Dunbeholden FC awarded $500,000 from Sagicor Jamaica to assist with next season’s title run

Kingston, Jamaica – Dunbeholden FC, 2021/2022 Jamaica Premier League (JPL) finalists, have received $500,000 from Sagicor Group Jamaica to aid their development for next season.
After landing a spot in the JPL final for the first time since earning promotion in the 2018-19 season, the St Catherine-based club was initially promised $500,000 if they took home the title. However, after delivering a hearty performance in Sunday’s final, which they lost 6-5 on penalties to Harbour View FC, Dunbeholden’s sponsor was moved to award them the cash incentive nonetheless.
Alysia White, Vice President – Group Marketing, Sagicor Group Jamaica, said Sagicor was very proud of the team’s performance.
“Although they didn’t win the title, the men showcased that they are here to stay and so we absolutely had to award them for a job well done,” White said. “This is their first final, so this award will play a role in the team’s plans for next season. We are proud to be associated with such a talented team. They fought to the end of what was an exciting match and with a great display of skill.”
Paul Christie, Dunbeholden FC team manager expressed that despite not winning the title, the team is looking forward to making it all the way next season.
“We said we were going to win the title and though we fell short, many people didn’t believe we were going to get here. Now they believe in the product, they fear us, and they know we are here to stay,” shared Christie. “As long as our structure remains, we will continue to improve, and next season will be ours.”
Christie went on to thank Sagicor for their support throughout the season.
“Sagicor believed in us when no one else did. It is no secret that Dunbeholden struggles financially, we are relatively new and have the smallest squad in the league. Their support means they have faith in our product,” shared Christie.
“More monetary support means our team will continue to develop and improve so this is a big help. Our focus has ever changed, we just want to play football the right way,” he continued.
In addition to the half a million dollars from Sagicor, Dunbeholden FC also received a cash prize of 1.75 million dollars from the JPL for placing second in the league. Sagicor sponsored the JPL to the tune of six million dollars this year.
-END-

About Sagicor Group Jamaica
Sagicor Group Jamaica is a financial services conglomerate.  The company commenced  operations in  1970 as  Life  of  Jamaica  (LOJ) Limited,  the  first locally owned  life  insurance  company  and  the  first  life  insurance  company  to  be  listed  on  the  Jamaica Stock Exchange (JSE).  The Group offers products and services in the areas of Banking, Insurance, Investments, Real Estate, Asset Management and Retirement Planning.  Sagicor Life Jamaica Limited  is  the  leading  life  and  health  insurance provider in  Jamaica; Sagicor Bank Jamaica Limited is one of Jamaica’s largest commercial banks, and Sagicor Investments Jamaica Limited is one of the top investments companies in the country.  Sagicor Group Jamaica is a member of the wider Sagicor Financial Corporation. Sagicor Financial Corporation operates in over 20 countries and its operations date back to 1840.
For further information, please contact Michelle-Ann Letman at 876.936.7838; 876-818-6204 or email [email protected]
Sagicor Group Jamaica, 28-48 Barbados Avenue, Kingston.