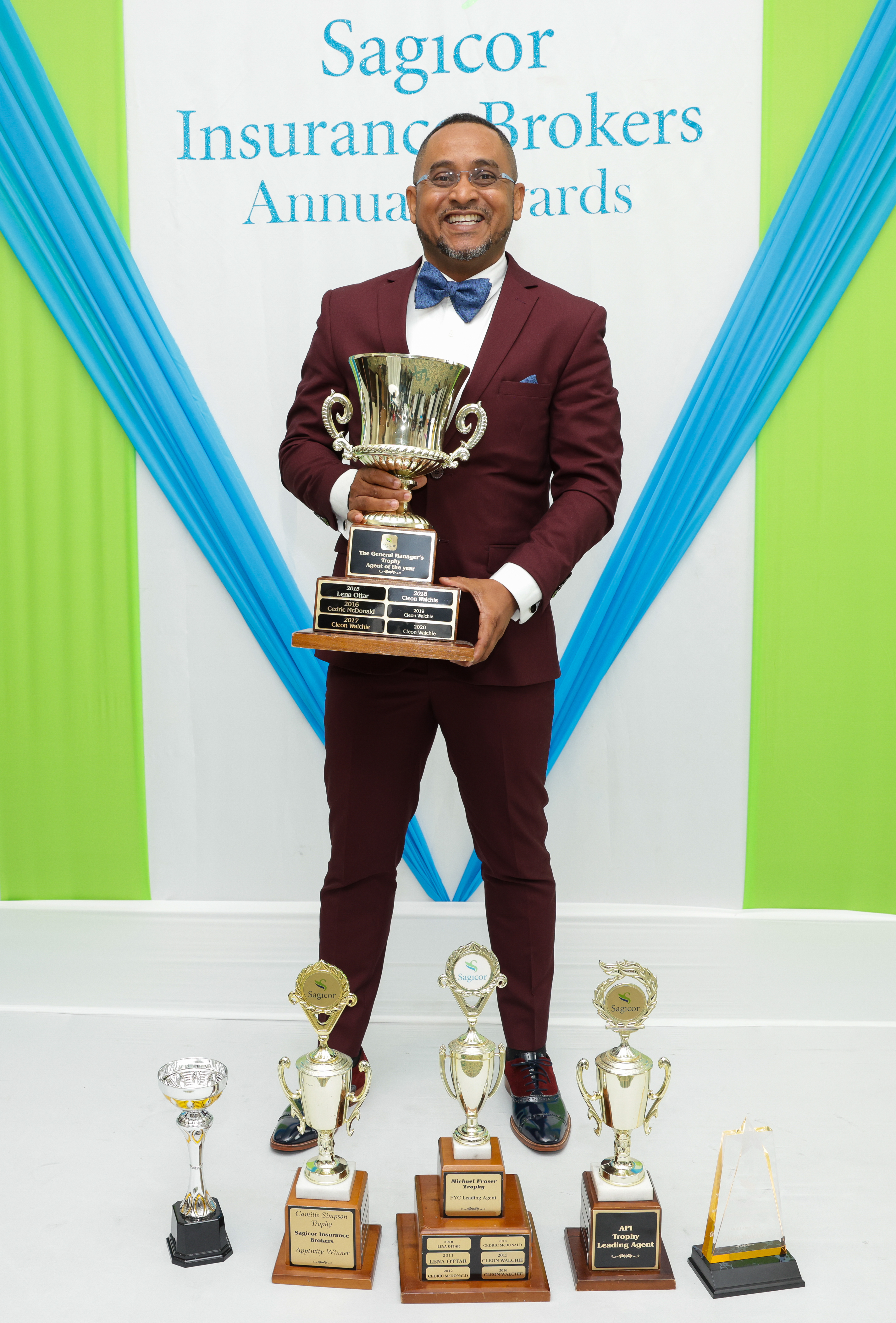 When asked how many awards he has received during his 13 years as a financial advisor, Cleon Walchie, Sagicor Insurance Broker’s (SIB) top agent, confessed that he has lost count. Having won over 25 trophies for Agent of the Month in the last 3 years alone, the most pressing question then became ‘how do you do it?’. With a humble look on his face, Walchie revealed that grit, communication and ‘becoming the CEO of his own life’ has been the main ingredient in a winning formula that has allowed him to climb to the rank of top agent and stay there.
When the Linstead native made the transition from being a business development officer at one of the largest banks, to owning a business and then finally, responding to the financial advisor advertisement placed by SIB in 2009, he never anticipated this much success.
“There are days when you will have to dig deep and find that grit to pull through for not only your clients, but for yourself. Give people the time of day and learn how to listen and use your expertise to guide and not force. You are not just a salesperson, clients come to you to lead them in the right direction towards achieving their financial goals,” shared Walchie.
Thinking back to his early years at SIB, Walchie shared that he had to overcome a few challenges before his career went to the next level.  “When I just started out, I was very good at getting clients to sign up, but I wasn’t doing well at maintaining the clients. Sometimes you have to hear the same thing over and over before it resonates, and it wasn’t until a few years later when I had a conversation with a senior member that it clicked. I realized that maintaining the clients was just as important as gaining them and that became the game changer for me,” admitted the former Charlemont and Manchester High student.
Despite not having a car at one point, a must have for an advisor, the 2022 President’s Club Qualifier was keen to point out that all the roadblocks and challenges in his early years at SIB led him to being more determined and becoming the agent that he is today. “I joke about quitting sometimes, but I’ve never really given it any serious thought. The two greatest moments of your life are when you were born and when you figure out why.  Most people live and die without figuring out the ‘why’ and I feel like my purpose is to positively impact the lives of my clients and those who I get the opportunity to give advice and mentorship to,” said Walchie.
Despite the uncertainties caused by the pandemic, Walchie, ACCA 1 and LUTCF/FSCP - prestigious industry designations - was once more appointed Top of the Table (which is the highest achievement globally for an advisor). He also copped five new trophies to add to his seemingly never-ending collection at the most recently held SIB Awards, including the coveted Agent of the Year.
Family is a big motivator for the financial advisor and what he credits for giving him the push to surpass all expectations. “My children are my biggest motivators. The moment life becomes about you alone is the moment you stop living. You must have a bigger purpose than self. I want to see myself as a vessel for blessing that will teach and pass on information, so that they don’t make the mistakes I did,” said Walchie, who is also the former Sagicor Life Jamaica Toastmaster President, an organization he insists played a huge role in his personal development.
Now looking back, Walchie is aware that he is no longer the young man who was making his way through a difficult yet rewarding industry, but now has a seat at the table with all the respected advisors.
“Your time will come; when I just came in the industry, there were persons in the organization I would only see from a distance and hear their names constantly mentioned. Then one day, I ended up being invited to a function to speak to the same advisors I used to dream of having a conversation with. Embrace learning and personal development, it’s not about you, there is more to life. Try to impact others in a positive way and you will be rewarded.”