Over 80 Barbadians to get free mammograms thanks to Sagicor Team

BRIDGETOWN, Barbados – The efforts of several determined team members across the Sagicor Group will ensure that more than a few less fortunate individuals will not have to pay for a mammogram.

During October, employees at all levels across the Group of companies rallied together to raise funds to give persons the opportunity to get free mammograms. Several creative avenues allowed for donations to be made. These included the purchase of special-edition Sagicor-branded pink shirts which team members donned on the last Friday of the month and the purchase of Sagicor-branded totes and cosmetic purses which featured the Breast Cancer ribbon. Employees also made pledges towards the cause.

Sagicor’s Vice President, Marketing, Communications and Brand Experience, Ingrid Card, said she was heartened by the team’s support. “We set a goal to raise $4000 with a goal to give 50 people free mammogram screening. The overwhelming support of our team members allowed us to exceed our target, raising over $7000 which will see just over 80 persons benefiting. It is our strong belief that everyone should have the opportunity to get their screenings done as part of an early detection strategy and we wanted to work with the Cancer Society to ensure that this was possible, even if you don’t have the financial means to get it done. Our team members continue to show that our vision is not just a statement but a way of life for all of us at Sagicor” she said.

Chairperson of the Barbados Cancer Society’s Breast Screening programme Dr. Shirley Hanoman-Jhagroo welcomed the company’s benevolence. “I applaud the efforts of the Sagicor Group during October, the month of “Breast Cancer Awareness” and am so delighted to have their cooperation as part of our commitment in saving the lives of those diagnosed with breast cancer by early detection. Their efforts would certainly have made a difference in bringing awareness of this disease which remains the most common cause of death from cancer amongst Barbadian women,” she said.

She added: “Screening mammography is one of the protocols to be adhered to for early detection, as mammograms can sometimes show cancer before a lump is found. The other two protocols are monthly breast self-examinations and an annual breast examination by a health professional. Breast cancer is no respecter of persons. At this time, we all hope for a universal cure or a safe method to prevent this disease, but neither is on the horizon so while we wait for this breakthrough, early detection continues to make a major difference in saving lives.”

All month long, Sagicor shone the spotlight on Breast Cancer with eye-catching messaging on the cross walks, sliding doors and elevator of Sheraton and Lanterns Malls. Each of its branches also acted as a canvas to sensitize the public and featured the large, pink ribbons associated with the cause as well as timely messages on its steps. 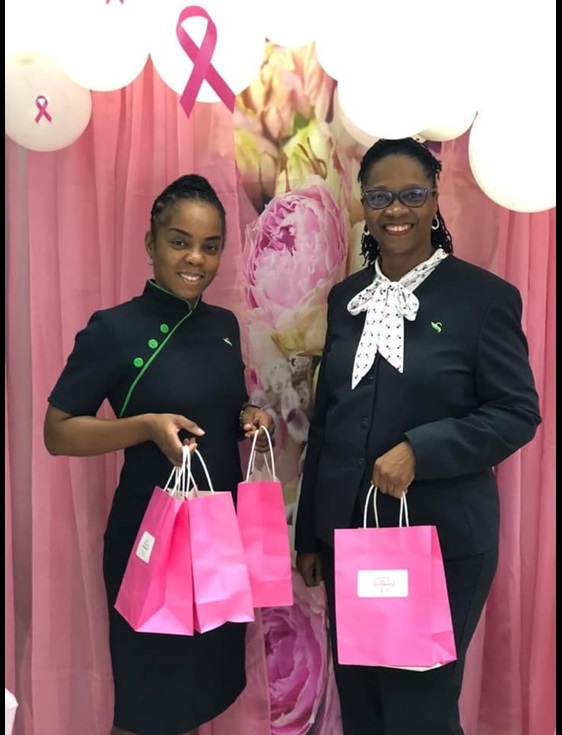 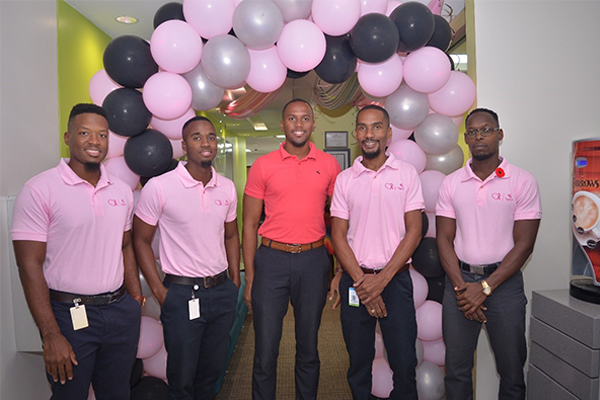 Sagicor’s males also showed their support for the cause. Here (from left) Anderson Rice, Shad Walcott, Kareem Payne, Anthony Simmons and Ryan Roberts strike a pose as a show of solidarity.