BRIDGETOWN, Barbados – In addition to the gifts of peace, love and good health for all, insurance company Sagicor General is hoping for safer roads this Christmas and beyond.

The company unveiled its bold message on road safety ahead of the busy holiday season, calling for all motorists to resist the urge to text while driving. The striking and graphic representation of the potential result of this dangerous practice has been displayed on the building that once housed the Ackee Tree restaurant on Hastings Main Road, Christ Church. 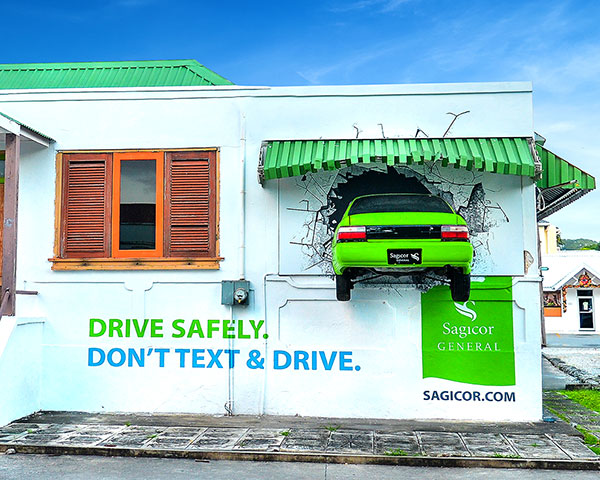 “We are very hopeful that the public will take our message seriously and refrain from cell phone use while driving”, said Keston Howell, President & CEO – Sagicor General. “Christmas is a time for joy and celebration, however, irresponsible practices such as driving while texting could quickly ruin any chance for this.”

“It is well known that the roads are busier and more congested at this time of year. It is therefore important for motorists to be vigilant and exercise caution while driving. As a general insurer, it is important for us to draw attention to this issue and highlight the importance of changing behaviours, especially texting and driving”, stated Mr. Howell.

“Everywhere you look motorists are utilising their mobile devices while driving, either on a call, or with their heads down as they read and respond to messages, whether personal, business or social media related. We want these persons to understand the potential, devastating repercussions of this behaviour, the most severe being the unnecessary loss of life”, he added.

Across the globe, there are some shocking statistics related to the pervasive use of mobile devices by motorists, a clear indication that regulations and fines have not been a deterrent and that traditional messaging has not been effective.
As such, President of the Barbados Road Safety Association, Sharmane Roland-Bowen, has endorsed the messaging by Sagicor and its continued efforts to draw attention to the risky practice.

“The Barbados Road Safety Association endorses this campaign by Sagicor. This visual expression displays one of the harsh realities associated with this very unsafe, but very common practice on our roads today”, said the President.

“We hope drivers will get the message, especially at this time of year when our roads become much busier with more motorists and pedestrians alike, increasing the potential for accidents. Let us use it also as an impetus to make our roads safer overall, by keeping our mind on the task of driving. Let’s indeed give a gift of safety, not only to ourselves, but to others this Christmas”, stated Ms. Roland-Bowen.

“On the first occasion it was erected, the billboard achieved our goal of sparking the conversation around texting and driving, however, it is clear that the discussion needs to be taken further”, said Howell. “This not only does that but allows us to engage the public in a way that we hope will inspire them to take steps to curb the problem.”