Castries, St Lucia: During the last week in October, customers of Sagicor, the leading Insurance company in St Lucia were celebrated in honour of Customer Appreciation Week. The week culminated with an extra dose of special treatment on Friday 26th October, as Sagicor mixed in a Creole element in honour of Creole Day.

“At the start of the year we were brainstorming when would be the best time of the year to thank our customers for choosing Sagicor and there was general agreement that Arts and Heritage Month is a really exciting time in St Lucia,” said Eon Phillips, Assistant Vice President for Sagicor Life’s Eastern Caribbean Operations and Branch Manager and Principal Representative for Sagicor Life Inc In St Lucia. “Using the last week in October, which culminates with the observance of Creole Day on the Sunday adds a special quality to the celebration because it makes it uniquely St Lucian.”

At the Sagicor offices in Vieux Fort, Castries and Choc Estate, celebrations started bright and early on Monday 22nd October, as customers who entered any of Sagicor’s offices were greeted with Creole inspired décor. In addition to the beautifully decorated public spaces, customers were treated to tokens of appreciation, tasty traditional creole food and refreshments.

On Friday staff were dressed in Creole inspired wear with madras fabric forming the basis of the female attire and many men complimented their professional gear with madras ties or straw hats. As an exciting finale into the weekend, customers who visited the Choc Estate office were able to step outside and enjoy the celebratory sounds of Mamai Kweyol, a traditional creole band who provided musical entertainment for customers and staff alike.

Following the event Don Austin, Chief Executive Officer for Sagicor Life in the Eastern Caribbean said, “Sagicor continues to be a successful company because of the collective and collaborative efforts of staff and customers. This is an opportunity to say thank you and we care.” 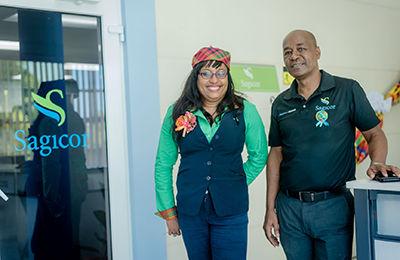