Having successfully navigated the most challenging year in the company’s 180-year history, Sagicor has made it clear that the reason that the company was able to record a triumphant 2020, was due to the stellar work of its hardworking and dedicated team.

The company recently showed its appreciation for the outstanding performances of the hundreds of men and women that make up the team across the Caribbean, during its virtual annual awards ceremony for the year 2020, which was held under the theme “Celebrating your MVPs”.

In his address to the over the 1000 team members who logged in for the virtual celebration, President and CEO of Sagicor Life Inc, Mr. Robert Trestrail, said “Tonight we celebrate your role in helping us to navigate and to come out on top of one of the most difficult times and one of most unprecedented times of all times. We demonstrated to the Caribbean, the industry and I would argue to the world, that team Sagicor has what it takes to win. Not just win once, but win every single time, no matter the challenge.” He stated that without question, the company’s remarkable achievements in 2020 were as a result of the team’s commitment, loyalty and love for Sagicor. “We did not retreat; we regrouped. The Sagicor team that met the needs of our customers, faster and better, while turning work from home on its head, is not the same team that started the year in January of 2020. By far we are more resilient, more creative, more innovative and willing to accept and overcome any challenge thrown our way.”

The second such virtual ceremony to be held since the onset of COVID-19, brought together employees from across its operations in the Southern, Eastern and Northern Caribbean, in addition to the USA, who all joined online to cheer on their colleagues who had been nominated for a number of prestigious awards, including Group Contributor of the Year, Group Sagicor Spirit Employee of the Year and Group Sagicor Spirit Manager of the Year.

After much anticipation and excitement which had been built up in the weeks and days leading up to the ceremony, the deserving winners were finally announced. Of the most coveted awards up for grabs, the Sagicor Spirit Employee of the Year award went to Kirk Shaw, Assistant Management – Facilities & Records Management, Sagicor Jamaica; while Paula Walcott, Assistant Vice President – Human Resources with Sagicor General Insurance Inc and Adrian Gittens, Mortgage Officer – Sagicor Asset Management Inc in Barbados, took home the Group Manager and Group Contributor of the year awards respectively.

After celebrating the excellence of their colleagues, virtual attendees partied to the musical selections of Red Bull Thre3style World Champion, DJ Puffy. 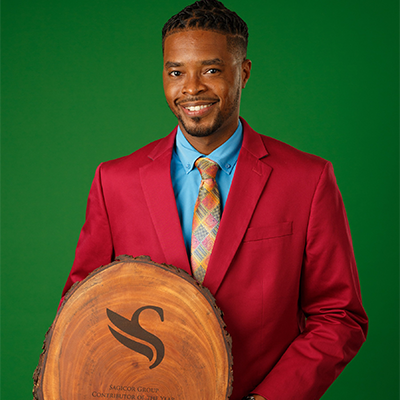