The HCC celebrated its 10th anniversary this year and to mark the occasion, the organisation released a Report entitled “Celebrating 10 Years of a Civil Society Regional Response to the Prevention and Control of Noncommunicable Diseases in the Caribbean” (NCDs). This anniversary is an impressive achievement for any organisation and a proud moment for supporters, such as Sagicor which has funded the organisation since the signing of a Memorandum of Understanding in 2012.

As partners in the fight against NCDs, Sagicor has spearheaded and supported various initiatives which focus on wellness including a Healthy Bodies activity day for primary school students, its Hospital Showcase and Information Seminar, the Globe-athon Walk & 5K Run to End Gynaecological Cancer and the HCC’s Calls-to Action to End Cervical Cancer and Childhood Obesity. Photos of these activities, and many more, were featured in the photo collage which was presented to the HCC.

Edward Clarke, Executive Vice President and General Manager - Barbados Operations, made the presentation and congratulated the HCC’s President, Professor Sir Trevor Hassell and Executive Director, Maisha Hutton. “The HCC has made great strides over the past ten years. Our time with you on this journey has been rewarding and fruitful. We stay committed to educating our clients, employees and the general public on the prevention of NCDs. We wish you continued success in the decades to come.” 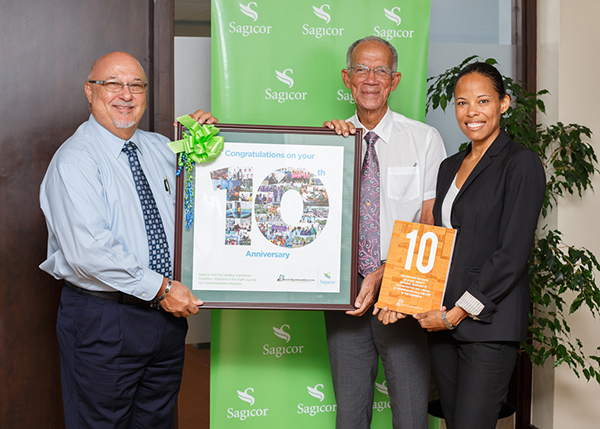