Bridgetown, Barbados – It was a significant moment in West Indian cricket history when Windies great, Sir Wes Hall reviewed the work of art miniature, which will become a full-sized statue depicting his bowling genius.  The statue will be erected in early 2020 in close proximity to the iconic Sir Garfield Sober monument outside the Kensington Oval.

Sir Wes, who is not only an outstanding cricketer, but a former West Indies manager, West Indies board president, Cabinet minister and priest, was very quietly appreciative of the honour: “I am very happy, and I am humble. I think that is the term because I really am. I didn’t think that anything like that would have happen to a guy who was born 30 yards below the walls of Glendairy Prison.”

He continued: “This statue will not just be for me …it is for us. Like most West Indian cricketers, I sprang from the proletariat and I therefore thank God really for his blessings and for looking after me and doing for me what I couldn’t do for myself. I also know that when you are given these iconic and these pleasantries in sports it is not only that particular individual sportsman that you are giving it to because he has played with so many of his pals for so many years that you look around and hope that maybe in another two or three years one of them will accompany you.”

The former West Indies fast baller, who was called “the chief” and who was the first West Indian cricketer to take a Test cricket hat-trick in Pakistan in 1959, who bowled the final over in two famous Test matches, the Tied Test against Australia in 1960 and the Lord's Test against England in 1963, said having a statue erected in his honour had never crossed his mind.

“Sir Wes has given so much to his country, cutting across generations and sectors and even countries. He is a man who has set precedent as a genuine fast bowler and renowned for his ability to bowl long spells. However, he is more than a great cricketer – he is a winner, a leader, a humble mentor who encouraged his peers and generation from across the Caribbean region of players and beyond, to be positive and to be great. Not many could argue with that he stands above many.”

He continued: “These are qualities that we at Sagicor admire, respect and continually emulate. At Sagicor we are committed to initiatives and developments that will enhance the long-term quality of life in the communities in which we work and live. This is one of those opportunities where we could influence and encourage youth development through sport which in turn can lead to promotion and enhancement of active public spirit, combat anti-social behaviour and help with economic development – in short long-term quality of life. Sir Wes exemplifies and embodies all those qualities as a sportsman, as a politician and as a leader in the church. And as his likeness stands tall next to Sir Garry’s outside the mecca, it will speak volumes to young men and women – those who play sports and those who don’t – that no matter where they are from, they too can be part of their great legacies.”

Continuing his conversation with Sagicor Communications Officer Tracy Moore, Sir Wes said, “I would like to say that it’s something that I never thought of. Not that you don’t think you are good enough, but simply because when you look around you haven’t seen anybody looking like me until the last ten years. With regard there is Frank Walcott, Grantley Adams and you say ‘yea I know those persons’ he added with chuckles. “But I think [having this statue] does that.”
“I have 192 wickets, but you know we’ve got guys with 400 and 500 wickets and in between there are quite a few people with 300 and so on but when you only played four games a year and in 12 years you played 48 Test [matches]... in 12 years you would play 200 Tests …then that is something. It then also has to be your contributions,” he said thoughtfully.

Sir Wes has done his fair share of contributions on and off the field. He was part of the West Indies team that won the World Champions from 1962 – 1969, playing with the likes of Charlie Griffith, Sir Garry and the late Seymore Nurse. He also managed the West Indies team who were champions in the 80s and considered the best team in the world. He served as President of the West Indies Cricket Board from 2001 to 2003. He is a member of the ICC Cricket Hall of Fame and the West Indies Cricket Hall of Fame and in 2012 he was created a Knight Bachelor for services to sport and the community. This is not to mention his contributions to the country serving in both the Barbados Senate and House of Assembly as well as being appointed Minister of Tourism in 1987.

Despite all his accomplishments, when he reminisced one person stands out – his friend Sir Garfield Sobers who he speaks of fondly as a brother, noting that it was therefore imperative to have Sir Garry as “a very important part of the process”.

“[Sir Garry] has been here though, supervising, looking and giving his advice with the pictures. In fact, we were looking at a different picture to do the statue from and he thought that my right hand looked like a leg spinner …and my reply was ‘yea a leg spinner that bowls 95 miles an hour,” Sir Wes said with laughter. “But because he didn’t particularly like that one we didn’t do it… but I think that we really needed his input because after all he is the greatest cricketer that has ever lived and perhaps will ever live because the game has changed so much now that it is a lot more difficult to be a Sobers,” said the now Reverend Sir Wes.

Sir Wes emphasized that having such an honour bestowed should be an incentive to the next generation: “It’s an incentive because if you see a statue going up of someone still alive, well then, your thought process will be maybe I would like that to happen to me sometime. It is something that you never thought about it because as you look around you see many examples but it is something that maybe some inspiration to most of young cricketers and indeed our sports men and women who have really excel not only from the point of view from the West Indies but worldwide – like the Olympics and World Cups and things like that.”

In making some final tweaks to the model of himself with the sculptor, Jason Brent Hope, the Associate Minister, Sir Wes, who was still humbled by the process, was sure to take a moment to thank all the players who helped him during his career.

“…for the administrators and all those who in my early days helped me to get into the West Indies team like Sir Everton Weekes and Sir Frank Worrell when I first started to my entire cricket plan and for about ten to 12 years all those guys who played cricket too,” he said with a warm smile. “I really believe in God and I think that he looks after us and that it isn’t very often that you would see this sort of thing happening. Indeed, there aren’t many people who are alive when this happens. For instance, George Headley was a master and his statue is at Sabina Park – that is fantastic – so that when you talk about George Headley, Sir Everton Weekes and Sir Viv Richards you are talking about the top draw, so I am very humbled that is why I really am.” 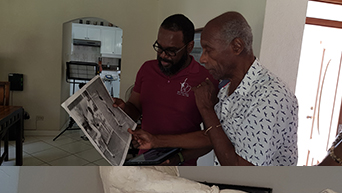 Sir Wes Hall (right) inspects photos with sculptor Jason Brent Hope (left) on what will be the final sculpture of his likeness.