Bridgetown, Barbados – Globeathon is back with a new name and new date but the message maintains the same – to end women’s gynaecological cancers.

The Globeathon is an international movement whose purpose was to unite persons around the globe about the disease killing our women. Rebranded Gynathon, the 5K Walk/Run will take place June 30, 2019 at 4:00pm with the purpose to get women to talk about gynecological cancers.

Speaking at the press launch of the rebranding on June 12, 2019, Dr. Vikash Chatrani, Country Head of Globeathon Barbados - now rebranded Gynathon Barbados - said “we need to give honor and pride to the female reproductive organs and we need to talk about them with dignity and respect, because these organs bring all humanity to life hence why we are rebranding the movement with a name that resonates more with the cause Gyn-A-Thon to end gynaecological cancers”
He noted that the movement was working adding more that women were coming forward to get screened and receive their pap smears, while parents were consenting for the HPV vaccine.

“Women are (increasingly) paying attention to their bodies knowing what is normal for them and what isn’t. They are going to their doctors with questions. They know something is up and they are asking for answers, and they are being diagnosed and getting referred. The number of deaths is decreasing,” according to Dr Chatrani, who is also the head of Department of the Obstetrician Gynaecologist & Gynae-Oncologist Department at the Queen Elizabeth Hospital (QEH), as well as medical director of the Barbados Cancer Society and Chairperson for Gynathon Barbados.

Dr. Dorothy Cooke-Johnson, President of the Barbados Cancer Society who also spoke at the launch, noted that Globeathon/Gynathon was initiated by Dr. Chatrani six years ago which had raised thousands of dollars to buy much needed equipment and training for personnel. She also lauded Sagicor for the support noting that the company adopted the local movement of Globeathon from inception in 2013 and became title sponsor from 2014.

“It is a great opportunity to work alongside the best company in Barbados, Sagicor Life. And a Sagicor Life/Health Insurance policy combined with the dedication shown by Sagicor to prevent and arrest cancer indicates their commitment to preventing all forms of cancer by awareness and proactive detection,” she said.

Mrs. Carolyn Shepherd, Assistant Vice President, Marketing, Communications & Brand Experience, Sagicor Life noted in her featured address that, “As an institution, Sagicor is committed to improving the lives of the people in our communities in the areas of education health and sports. Today as we launch the newly branded Gynathon, we focus on the health of the women in our communities because so many of us are affected directly or indirectly by some form of gynecological cancer. These cancers include ovarian, uterine, vaginal, vulvar and cervical which is one of the most common cancers among women in the Barbados according to the Pan-American Health Organisation. This is extremely important to us – not only because we offer health plans at Sagicor Life Inc., - but because we need both our staff and our customers to be well informed to protect themselves.”

She further added, “Even though the name and date have changed, the intention and mission remain the same: to foster public awareness and education about gynecologic cancer, with a specific agenda to end women’s cancers so that no other mother, sister, aunt, female loved-one or friend, learn the facts the hardest way through sickness and or death.”

T-Shirts are available at outlets across the island and are priced at $25 for adults and $15 for children. Runners require bibs, will be timed and are $35 each. 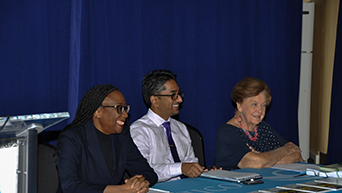