August 21, 2018
St John’s, Antigua: The Enforcers, the number one female softball cricket team in Antigua Barbuda entered this year’s annual Antigua Barbuda Netball Association League and emerged with a second-place finish overall, much to the delight of the players and its supporters. In addition to second place overall the team won the 20 and 25 overs championship and narrowly missed the 10 overs championship.

Sharon Francis, President of the Enforcers Cricket Club and an Advisor with Sagicor Life Inc, said that she and the team were over the moon with the team’s first-time performance in the national netball league. She said, “We’re well known for cricket, but we’re all-round athletes with other interests as well. So, we decided to enter the Netball League and Sagicor Life Inc provided us with sponsorship funding for which we are so grateful. On behalf of the entire team I want to say thanks for the confidence placed in us as a netball team, especially since we’re not known for that sport. We are very proud and honoured to bring home second place, and hopefully next time we’ll bring home the first-place trophy.”

In addition to the presence and lead of Sharon Francis who has worked as an Advisor with Sagicor Life for several years. Vanessa Burke, Customer Service Representative with Sagicor General also plays on the team.

Marisia James, Branch Manager for Sagicor Life Inc in Antigua and Barbuda, “We’re very happy with the team’s performance overall and congratulate them on their success. I have no doubt that this group of determined women will continue to grow from strength to strength and succeed at whatever they put their minds to.” 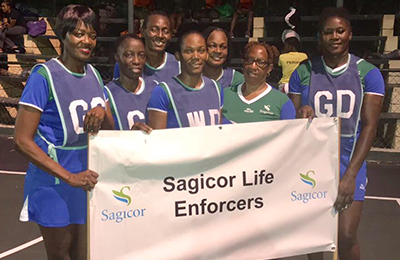