Port of Spain, Trinidad—“The world owes you a living but you have to work hard to collect it.” A daily reminder in his father’s car many years ago, these words drive Sagicor branch manager Wayne Mohammed to excel.

A second-generation “insurance man,” Mohammed used to accompany his father Azan Mohammed in the early 80s as he would sell insurance, sparking the younger Mohammed’s love and dedication for the field. “If I was to come back in this life again, I will still want to be an insurance agent. I love the business so much. I see how it can change people’s lives for the better. It’s the ideal job. You can work on your own time. You can make money out of it. You are rewarded for your productivity so there’s no ceiling in terms of a salary. You write your own pay cheque. It’s the ideal career.”

Mohammed joined The Barbados Mutual Life Assurance Society in 1986, now known as Sagicor, when Perry Evelyn was the general manager. Despite briefly working at two other insurance companies from 1988 to 1993, Mohammed returned to his Sagicor family in August 1993.

Since then, his career at Sagicor has moved from strength to strength, winning Unit of the Year at the Trinidad and Tobago Association of Insurance and Financial Advisors (TTAIFA) and at Sagicor for his team’s 2009 production, his first year as a unit manager. His other accolades also include copping agency of the year in 2010, 2011, 2013, and 2014, as well as qualifying for the Million Dollar Round Table (MDRT) on seven occasions. Today, the reward for his dedication has been his appointment as branch manager at Sagicor’s San Fernando office in January 2021.

Maintaining that he gets his work ethic from his father, he said, “My father was in insurance for about 20 years, starting at Colonial Life. When you’re talking about insurance in Trinidad and Tobago, Neil Jones was branded as one of the top insurance agents at that time, Azan was number two.” Mohammed said his father “had influence on my career path being in the insurance business and I was able to see first-hand what success in the insurance business looks like, as he was a top agent who qualified for MDRT and company conventions.”

Mohammed’s fondest memory of his father, however, has nothing to do with the insurance business. “Every year, my dad would take the family to Mayaro. He would rent a beach house, usually the same beach house every year, and for two weeks we would close the home in Chaguanas. He was a scout master in his early days and learnt a lot of folk songs, so he would have us sing on the car ride to Mayaro. There was no TV back in those days at beach houses, so family bonding was everything. What stands out the most was spending time with him.”

Although many may see the insurance business as calling for someone who is more of an extrovert, Mohammed considers himself a quiet, reserved person. “My hobby is music, not singing or writing but listening to music. I remember taping music from the radio, those were the days when the announcer spoke and spoil the whole tape.”

On his second marriage, Mohammed met his wife Neila back when he was 23. “My brother knew her sister, so we went on double dates, but she had to go back to the US. With Facebook, we reconnected about six years ago and started to chat. We got married in 2016, and she returned to live in Trinidad. She came back because of love.”

Mohammed said, “In life, you never know what the future holds. You make the best of the time you have now. I’m very passionate about the insurance business. I’m doing something that I love to do. I still get up every morning with the same amount of passion that I did years ago to get out there and do something and make my mark in the world. This is not a job to me. The business itself has become like a hobby. I love doing it.”

While having a passion for the business is a powerful motivator, it is building relationships with people on the whole that is the key to his business. “Clients have become like family. Clients invite me to the important occasions in their lives, whether prayers, weddings, you name it. I remember one client who was going off on hajj and told his family if they needed help with anything to call Wayne. Imagine that!”

He had some advice for those wishing to enter the field that has given him so much. “Discipline is the key to this business. It’s very easy for you to be side-tracked but you have to create your own rules and abide by them. Accountability to self. It’s not an 8-4 job. Be accountable to yourself first. You are the manager for yourself. Passion. If there’s something in life that’s not working for you, that you’re not happy with, whether it’s marriage, whether it’s a job, get out of it and go find something that will make you happy.”

Mohammed is a Chaguanas man through and through, having grown up walking distance from his alma mater Presentation College from the family home, where he still resides today. 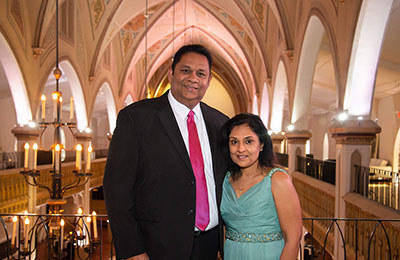 Former insurance stalwart Azan Mohammed and his wife Rose
enjoy their time at Sagicor’s (formerly The Mutual) Convention
in Canada in 1985. His son Wayne followed in his father’s footsteps,
having also qualified for Convention on numerous occasions.