August 18, 2022
Regional financial services entity Sagicor partnered with the Caribbean Network for Integrated Rural Development (CNIRD), the country coordinator of the International Coastal Clean Up for Trinidad and Tobago (T&T) and the Caribbean Youth Environment Network (CYEN) Trinidad and Tobago, to conduct a coastal clean-up at the Foreshore Lookout, Audrey Jeffers Highway, on Saturday, August 6.

The clean-up collected over 485 kgs (1,070 lbs) of garbage, including three tyres, two suitcases and even washing machine parts. It was supported by almost 40 team members from Sagicor General Insurance Inc (SGI), Sagicor Investments Trinidad and Tobago Limited, and CYEN volunteers. It was part of a wider, regional beach clean-up collaboration with the CYEN Sub Regional office located in Barbados. The target countries included Barbados, as well as T&T, and  is scheduled for other territories in the southern Caribbean, with the Barbados team collecting 149 kgs (328 lbs) of debris.

Keston Howell, president and CEO of SGI, said, “As small-island states, environmental issues impact us first, and with our economies dependent on tourism, including eco-tourism, it is vital that citizens invest in better mitigation practices, in addition to maintaining our physical environment. Supporting the work of organisations such as the CYEN and the CNIRD that work tirelessly to keep our coastlines clean, not just for human enjoyment and safety, but also for the protection of the flora and fauna that surround us, is something that all of us should be invested in.”

Executive director Marissa Mohamed from the CNIRD agreed. She said, “Marine litter has long been one of the most urgent and imminent threats to all oceans and coastal areas, including on the shorelines of T&T. Clean-up initiatives, such as this one at the Foreshore, will reduce the likelihood of injury or death to wildlife, minimise the threats to sensitive habitats, increase the natural aesthetic beauty of our beaches, which in turn raises the recreational value and tourism quality of these resources; and reduce the risk posed to human health and safety.

“We, at the CNIRD, are optimistic that T&T’s society will continue to adopt wiser choices in our waste disposal habits. We look forward to continued and welcome new collaborations and synergies, just as we did with Sagicor in stemming the tide of marine litter.”

The CNIRD invites citizens to participate in the International Coastal Clean-up that will take place on September 17, 2022, in over 100-plus countries worldwide, including T&T. 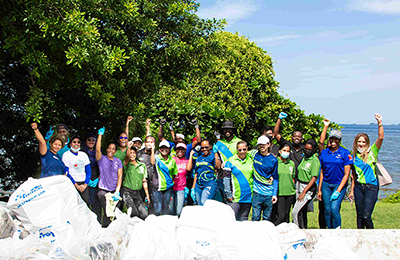 The team of volunteers from Sagicor General Insurance Inc; Sagicor Investments Trinidad and Tobago Limited; the Caribbean Network for Integrated Rural Development (CNIRD); and the Caribbean Youth Environment Network, with 50 bags containing plastic and cans, general waste, and glass. The 1,070 lbs of debris were collected at The Foreshore on Saturday, August 6.