Sagicor’s Virtual Divali Concert, Sangeetamay Deepavali, was the culmination of several activities produced by the organisation to celebrate the Festival of Lights.

The concert, which took place on Sunday, November 15, has since been viewed over 59,000 times on Facebook, and resonated with viewers, who took to the social media platform to share their comments. Gillian Changa said, “Beautiful. All of it. It was so lovely to see this during what feels like dark times. Bravo to your team.” Sheena Dave said, “Love seeing this. It makes me feel close to home.”

The evening’s entertainment showcased the traditional song and dance of the East Indian community, with performances by Nithya and lead singer Nirmala Sesnarayan, singer Neval Chatelal, the 411 Dance Theatre, the Khalnayak Academy of Dance, and the NGC Trinidad & Tobago Sweet Tassa All Girls Band.

Ravi Rambarran, President and CEO, Sagicor Life Inc, said, “This year, we celebrate under unusual circumstances. Divali is the celebration and the reaffirmation of the belief that light will eventually conquer darkness. I think it is fair to say that in 2020 we’ve been exposed to many manifestations of darkness. Many of us can no longer interact socially with our friends and family as we would wish to. Many of our personal freedoms have been curtailed. Despite these forms of darkness, we are still here to celebrate in a different way. But what matters is we choose to celebrate.”

Sagicor staff were invited to dress in their ethnic wear on November 13, while traditional Indian sweets were shared with clients through the Customer Service department. The public were also educated on the origins of Divali through a sponsored segment on 103FM.

The celebration of Divali would not be complete without sharing the blessings that are bestowed on its adherents with others. As such, Sagicor executives Robert Trestrail and Keston Howell visited the Court Shamrock Shelter for the Socially Displaced in San Fernando and distributed meals to the residents. 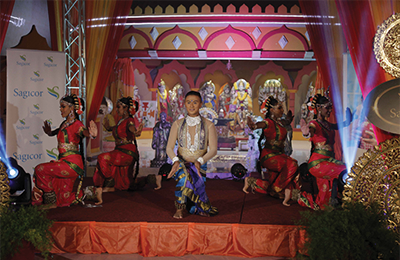 The Khalnayak Academy of Dance, led by its founder and artistic director Brian Mangaroo, perform during Sageetamay Deepavali, Sagicor’s Virtual Divali Concert, held on November 15, and broadcasted on its Facebook and YouTube channels. 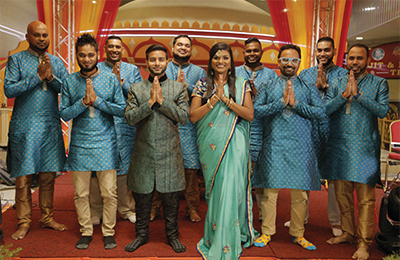 The band Nithya, with its lead singer Nirmala Sesnarayan, and Neval Chatelal, third from left, extend Divali greetings to the public of Trinidad and Tobago, after their performances at Sageetamay Deepavali, Sagicor’s Virtual Divali Concert, held on November 15, and has been viewed over 59,000 times on Facebook. 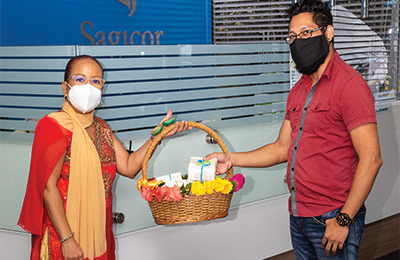 Merlana Boissiere, a Customer Service supervisor based at Sagicor’s Chaguanas branch, shares Indian delicacies with a client, on November 13. 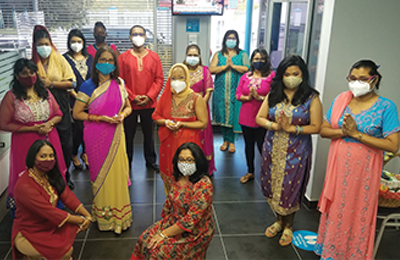 Staff model their ethnic wear at the Chaguanas branch of Sagicor in the lead up to Divali, which was observed on November 14.