Divali is more than just a celebration of the triumph of light over darkness, it is also about sharing those blessings with others. Sagicor executives Robert Trestrail and Keston Howell demonstrated their understanding of this when they visited the Court Shamrock Shelter for the Socially Displaced in San Fernando and distributed meals to the residents on November 13. It was also appropriate that World Kindness Day took place during the five-day long festival of Divali, as it is observed internationally on November 13.

Trestrail, Executive Vice President and General Manager, Sagicor Life Inc, said, “Divali is about giving and sharing with others. Sagicor has a responsibility, as a corporate citizen, to improve the lives of the people in the communities in which we operate. This activity was a collaboration with one of our NGO partners Sewa TT led by Revan Teelucksingh. The NGO is a regular supporter of Court Shamrock and Sagicor was happy to come on board.”

Court Shamrock celebrates its 21st year at its Rushworth Street, San Fernando, location, where it was established by the San Fernando Regional Corporation. The shelter houses male residents only, with the oldest being 80 years. Despite receiving a government subvention every three months, the shelter is making every effort to be self-sufficient where possible, with residents raising chickens and rabbits, as well as tending to a kitchen garden.

Today, the shelter is managed by Gloria Coombs and supervisor Kim Marcano. Coombs has been with the organisation from the beginning but became the manager in January 2020. She said, “This is a job that you really have to love, not like, you have to love it. You have to understand and know people.” Marcano can relate to the residents, having spent time on the streets of San Fernando then finding his way back to civil society.

Howell, President and CEO, Sagicor General Insurance, said, “Court Shamrock fulfills a role in society that’s unfortunately much needed. There’s a proverb that comes to mind: There but for the grace of God, go I. We need to remember that as much as we can focus on our financial and physical well-being, taking care of our mental health and developing coping mechanisms are equally as important.”

Sagicor has partnered with Sewa TT on several initiatives over the years, including flood relief since 2018 to present, as well as the production of 20,000 reuseable face masks for free distribution at the beginning of the COVID-19 global health pandemic. 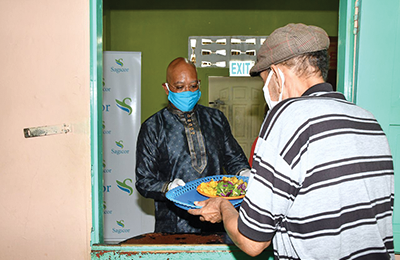 Keston Howell, President and CEO, Sagicor General Insurance, hands over a plate to a resident for the midday meal at the Court Shamrock Shelter for the Socially Displaced.