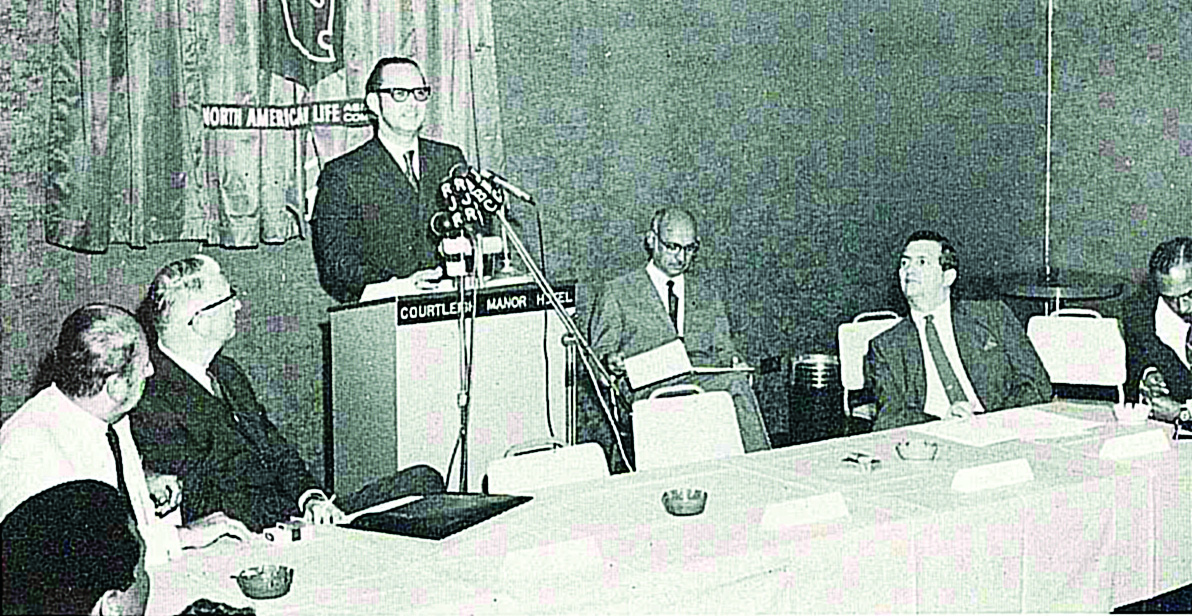 On, June 1, 2020, Sagicor celebrated 50 years in Jamaica. What started out as a dream and a vision by founder R. Danny Williams and his co-founders to Jamaicanise the Life Insurance industry, the team achieved this and more.

Through a name change, several key acquisitions and dedication, the company has morphed into a beloved conglomerate spanning Investments, Banking, Real Estate, Property Services, a Philanthropic arm assisting millions of Jamaicans to achieve their once seemingly farfetched dreams. Along the way, the company has been called an innovator, championing many firsts in the region; let’s look at five (5) ways the company, now called Sagicor Group Jamaica changed the game.

First To Initiate The Jamacanization of The Life Insurance Industry.
1) Back in the 1960’s there were no Jamaican insurance companies to be found, with the exception of Jamaica Mutual. The island had 17 insurance branches made up of American, Canadian and Scottish but none represented the people of Jamaica. With his experience gained as a top sales rep, along with other well suited and accomplished advisors, R Danny Williams set out to create the first publicly owned Jamaican life insurance company. He did this knowing that Jamaica at the time did not have an actuary on the island. This however did not deter him and in March 1970 the announcement was made that a new insurance player would enter the market. The name? Life of Jamaica. As the team put it for a better Life. Since that fateful day in 1970, several other life insurance brands were born, millions of dollars have been settled in premiums, more actuaries have been trained, niche and innovative products for women, non-smokers, HIV-affected persons have been created, and more advisors commissioned (now called Financial Advisors) to create the modern Life Insurance industry in Jamaica.

First To Have In Excess of 200 Agents Qualifying For MDRT. (2005)
2) The development of the Life Insurance Industry in Jamaica came at a crucial time. Life of Jamaica, being birthed within 8 years post-independence, brought with it a sense of national pride. Jamaicans were free from the British rule and now able to make their own living. Key strategies in developing his agents were rigorous recruitment, intensive training in sales strategy and motivation, and sharing the rewards of the hard work he demanded of his team. This winning formula was mastered by Williams in his early days as a sales advisor starting in his teens. As he continued to teach agents how to prospect, and meet the needs of their clients, their awards racked up. This principle lead the team to have over 200 agents qualifying for the Million Dollar Round Table – an elite core of the best financial advisors globally, known for bringing quality work to their clients and value to their organization. Since then Sagicor representatives have been revered for their sheer skill, work ethic and drive to attend to clients. This same spirit lives on today long after Danny’s 1995 retirement.

First To Aggressively Recruit Women As Advisors in Life Insurance.
3) It’s no secret that women make outstanding/proficient/exemplary managers, but in the 1960’s and 1970’s women were subjected to the approval of their husbands should they decide to take on additional work outside the home. This, Danny Williams saw as an opportunity; he approached this with a carefully thought out plan, and aggressively started to recruit women. Under his tutelage, and others in the company, women became an integral and powerful part of the sales force. Danny guided the careers of several women who would go on to become exceptional at their client servicing and craft and thus open the door for more women to take control of their future. Today, female advisors compete head-to-head in their male counterparts for sales, client satisfaction and better quality of life through life insurance.

First To Effectively Mass-Market Mobile Wallet and Launch a Mobile POS with MyCash and Swype
4) In June 2018, Sagicor and its subsidiary, Sagicor Bank made a bold move. Understanding the ebbs and flow of the international market and its trend for going cashless, the bank launched SWYPE, a tool that would increase the earning potential of small, medium and micro businesses, as they are no longer limited to cash transactions. The move was a hit! It pushed the market to have competitors launch similar products in order to capture that market share, understanding the power of mobile and cashless transactions.

A few months following the launch of Swype, in August 2018 armed with research regarding unbanked Jamaicans, the bank partnered with Digicel and MasterCard to launch MyCash Jamaica – a mobile wallet solution which allows anyone without a bank account to transfer, send, shop and pay with ease and convenience. This move prompted several other brands to release similar versions in understanding that while some Jamaicans do not wish to have a bank account, they still need access to cash to do transactions online.

First to bring Listed Equity Fund to the Jamaican Market with Sagicor Select Funds
5) For many investors, it’s really the same strategy, watch the stock, buy the stock and allow it to grow.  Sagicor Investments in 2019 asked ‘what if I could benefit from a group of stocks as opposed just one’; Sagicor Select Funds was born. Aided with months of research and careful planning, the launch of the Listed Equity Fund promised shareholders the ability to benefit from the buffer of a group of stocks versus simply purchasing one by one. This move was met with much fanfare and saw the company earn an over-subscription of $6.3 billion dollars. The game in stock purchases was changed.

BONUS MOVE - eLife – Life Insurance Online.
In 2019, Sagicor Life challenged the notion that Jamaicans could not purchase Life Insurance online and did just that – launching the Caribbean’s first online platform to allow for the purchase of coupon life insurance policies wherever, whenever. Fast forward to the COVID19 pandemic in 2020 and you can see just how timely that move was.

In its 50 years of existence, Sagicor continues to innovate as it changes with the times. Now with over four different business lines to meet clients’ needs, the ambition to serve clients with cutting edge products and services is the company’s goal. Whilst the market has changed since 1970, the passion, drive and innovation remain the same.