Sagicor maintains its commitment to the Sagicor Southeast Football Club

Sagicor Southeast Football Club has won the Premier League twice and has a history of  placing in the top four teams. Throughout their history, they have ended a season outside of the top four, only once. The team was founded in 1990 and comprises of individuals from the communities of Laplain, Grand Fond, Delicies and Riviere Cyrique.

The relationship between the Football Club and the Sagicor is a long one with the regional insurance company supporting the team for the past 22 years. Cheryl Rolle used the opportunity to encourage the footballers to do their best, for their hometowns, their team and their country. She said, “We have been sponsoring the football team for many years and there is something special about this team – they work hard, train hard and we have seen the results as back to back winners of the Premier League. We support them not just from a financial perspective but also by attending their games and with other activities and events that are motivational and keep future planning in the front view.” She also emphasized that the relationship between Sagicor and the football club is a holistic one as the team is also covered by the company’s general insurance arm, Sagicor General, when traveling for tournaments and competitions.

Mr. Green in accepting the contribution said “We want to say a special thank you to Sagicor not just for the financial support which has come every year for the last 22 years, but it’s also the fact that the staff of Sagicor in Dominica shows up at football games and events that we have from time to time. That is a special encouragement to urge the guys to do their best. The opportunity to represent Dominica in Puerto Rico next week as the club champion of Dominica, the opportunity to join 13 other champion clubs from the Caribbean in a Caribbean Club Shield is tremendous for us. We are planning to do our best, so we are grateful to Sagicor for the foundation and the back up that has been there for so long.”

The tournament will begin on April 15 with the first Group Stage matches. After round robin play, from April 15 to 19, the four group winners will advance to the semifinals, scheduled for April 22 in Mayagüez. The final, where a new champion will be crowned, and the third place match will also be played in Mayagüez, on Sunday, April 24.

The South East Football Club is part of Group A and will play against teams from Puerto Rico, Sint Maarten and Saint Martin.  Fans in the Caribbean will be able to follow and enjoy the competition on Flow Sports. 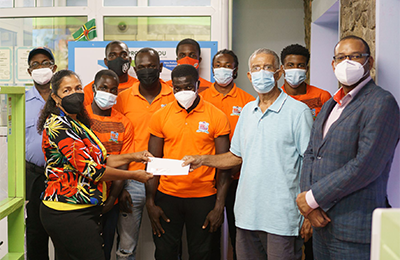