Krystal Bunting Employee of the Year

April 11, 2019
The Employee Benefits department was on hand to cheer on their colleague, account associate Krystal Bunting, as she was declared Sagicor’s 2018 Spirit Employee of the Year, at Sagicor’s 2018 Annual Awards function on Thursday, March 21, at the Hyatt Regency, Port of Spain.
This is Bunting’s first major win at Sagicor, as she was previously nominated for Contributor of the Year award for 2014 and 2015. The Spirit Employee of the Year Award recognises one employee, who demonstrated the Sagicor spirit and, who, among other things, enthusiastically embraced change, was a great team player/team leader, and successfully participated in major operational/systems change.
Bunting’s Sagicor journey began in 2011 in the Billings and Administration Unit of the Employee Benefits department, and she transferred to Business Development in the same
department in 2013, where she handles design and pricing of group plans.Bunting earned her win through hard work over 2018, having prepared well in group
business and pensions. Bunting balances her professional life with community service, as she volunteers as a tutor for the Adult Literacy Tutors’ Association (ALTA).
Bunting has an MBA in Business Administration from Anglia Ruskin University in 2012, and a BBA in Business Administration from the University of New Brunswick in 2009.
She also achieved the designation of FLMI (Fellow, Life Management Institute) from LOMA in 2015.
Sagicor congratulates Krystal Bunting on her achievement! 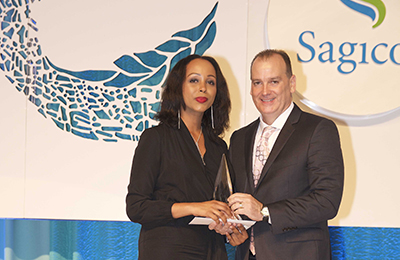