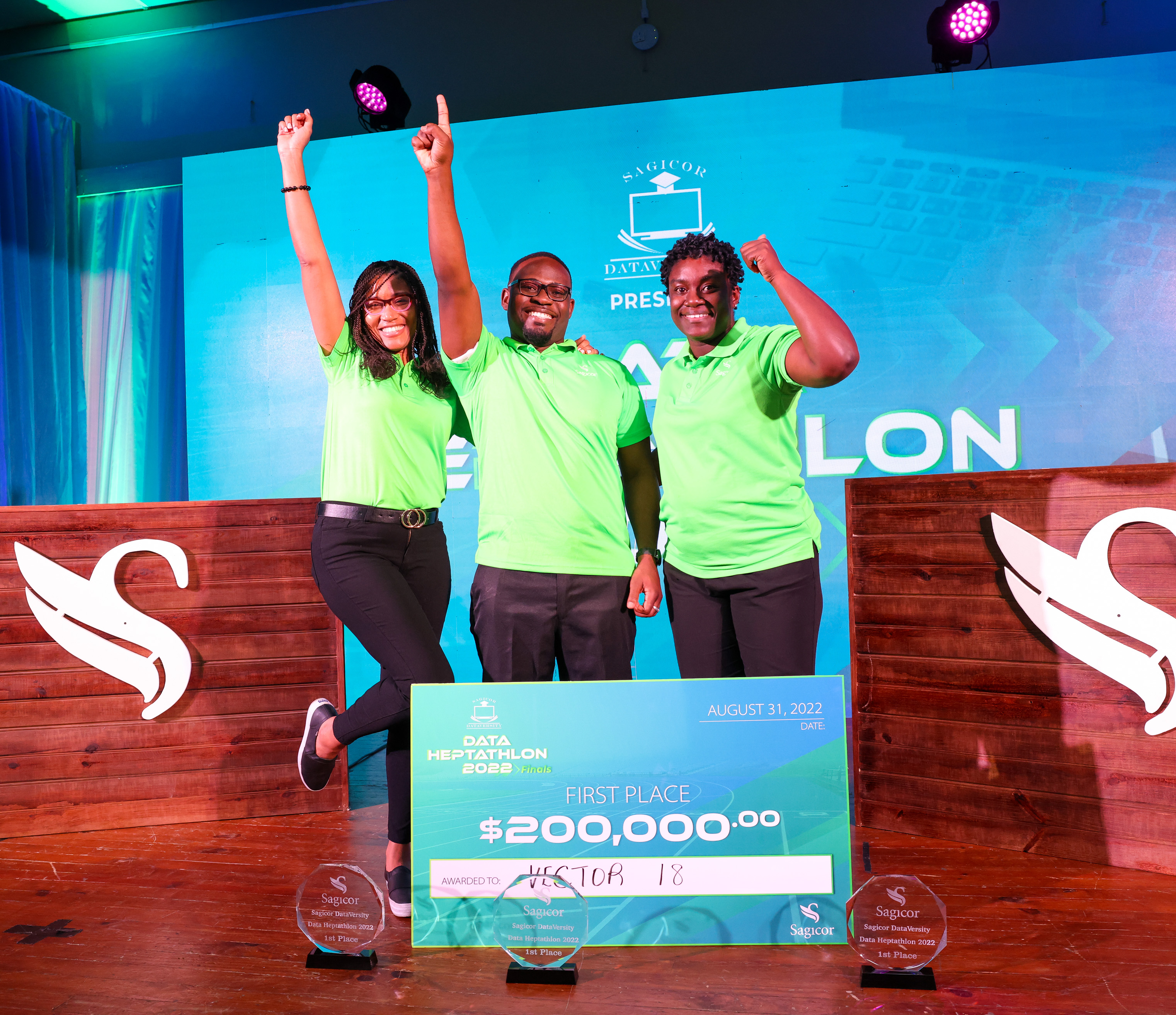 Team Vector 18 edged out the B.A.D. Squad in Sagicor Data Heptathlon Challenge, a series of competitive events to increase data literacy among its team members.

Sagicor's Data and Analytics Department ran the Olympics-styled competition among teams from the group's various departments, lines of businesses, and subsidiaries in Jamaica in the weekly data-centred competitions throughout July and August.

Named after each athletic event in an Olympic heptathlon, 11 teams participated in the virtual play-offs. Teams accumulated points by completing puzzles, creating videos, designing posters, and other fun activities using the data study texts and study materials from Sagicor's Data Governance Framework and other internal and external resources.

"This competition was developed to help team members to be better able to read, understand, create, and communicate using data across the Sagicor Group," said Opal Donaldson-Cross, assistant vice-president, data and analytics, Sagicor Group Jamaica. "We're very pleased with the outcome, as we had entire departments engaging with the core content as they cheered their teams along. Additionally, the data literacy of the group has increased based on standard industry metrics provided by Gartner; and as a group our data literacy is at a level that we are proud of," Donaldson-Cross said.

After a thrilling 'data bingo' tournament, the top-three teams in the heptathlon advanced to the final event on August 31 — B.A.D. Squad from Group Marketing, Vector 18 from Group Project Management Office, and Gen X.Y.Z. from Group Revenue Solutions.

A semi-final play-off between B.A.D. Squad and Gen X.Y.Z. – who were ranked second and third place respectively — saw B.A.D. Squad advancing to the final match against Vector 18 for the chance to be crowned overall data heptathlon champions.

In an intense final, both teams tied on eight points at the end of round one, with Vector 18 gaining a slight advantage in the speed section. In a nail-biting buzzer section, Vector 18 edged out B.A.D. Squad by three points to emerge the day's victors.

Sagicor Group Jamaica president and CEO Christopher Zacca praised the data and analytics team for consistently creating ways to improve the conglomerate's data culture through team member engagement: "The depth of data knowledge that we've witnessed from today's games is proof of how competitive we are at Sagicor and how our data and analytics team has once again harnessed that competitive spirit for the benefit of the group," Zacca said. "Indeed, with continued creative initiatives such as these, we are on track to achieving our Data Governance Committee's vision of creating a world-class, data-centric Sagicor Group Jamaica," Zacca said.

Vector 18's team Captain Kelley-Ann Grant shared that participating in this challenge positively impacted her team and department's appreciation for data and Sagicor's data assets. "Our department, Group Project Management Office (GPMO) understands that data is everybody's business and is at the core of our business decisions. As such, participating in this challenge increased our awareness of Sagicor's mission for data."