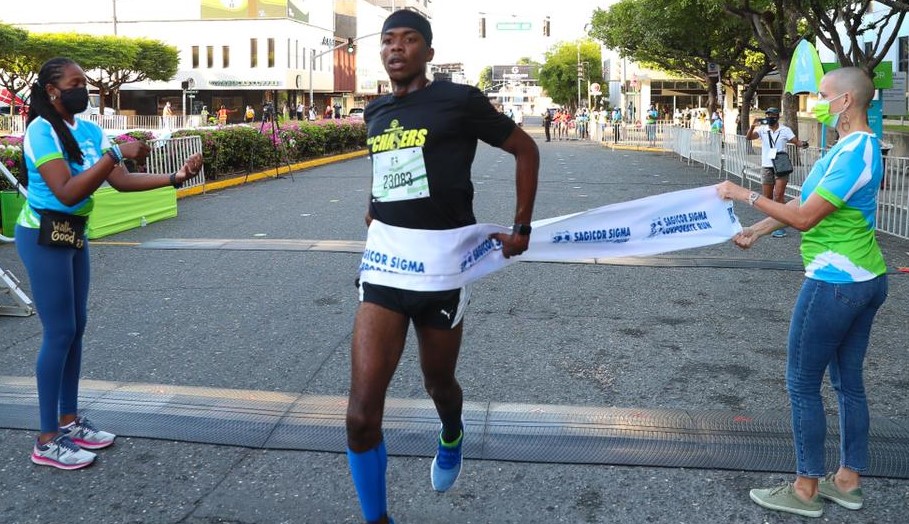 The top 100 runners over the past five years from the annual Sigma Corporate Run, also organized by Sagicor Group Jamaica, were invited to participate. Eighty-nine athletes eventually took part in the run.

Alysia White, vice president of Sagicor’s group marketing and executive director of the Sagicor Foundation said that the invitational event got the nod of approval from all the relevant authorities and was held in keeping with strict adherence to COVID-19 protocols.

She described the planning process as “rigorous” citing that it took up to six different approvals before the staging of the event. White explained that they had to execute all the COVID-19 protocols as outlined by the Ministry of Health and Wellness on the day or risked the event being shut down.

One such condition from the health authorities was that the organizers create a database with contact information for all athletes and volunteers.

She said the information received would be stored for 30 days to present to health authorities if an individual tests positive for the virus.

The company in a statement highlighted the steps it took in order to gain approval for the event.

"Race managers of the Sigma Corporate Run, Running Events Jamaica, first wrote to the Ministry of Culture, Gender, Entertainment and Sport with a proposal which was approved based on the protocols presented.

"The proposal was then sent to the Office of Disaster Preparedness and Emergency Management (ODPEM) and approval was granted.

"Subsequently, the Jamaica Constabulary Force (JCF) approved, followed by the National Works Agency who granted approval for the use of the roads.  The Kingston and St Andrew Municipal Corporation was then able to issue us with a license to proceed.  The Ministry of Health also gave their approval and endorsement based on the protocols in place.

"We were also pleased to receive the endorsement of the Jamaica Athletic Administrative Association (JAAA) who wrote to the Ministry of Sports on their own accord, endorsing the Sigma Run Invitational.

"All protocols were rigorously followed under the supervision of the relevant authorities who were present to ensure compliance. It is our hope that this execution can act as a template for future sporting events in Jamaica."

On February 2, Prime Minister Andrew Holness announced that the Government had given the green light for the resumption of sporting activities on a case-by-case basis.

Sport Minister Olivia Grange said that provision for the resumption of sporting activities has been included in the Disaster Risk Management (Enforcement Measures) (No. 2) Order, 2021.

“Under the Disaster Risk Management Order, organizers of sports events must first send an application to the Director of Sports in the Ministry of Culture, Gender, Entertainment and Sport," said Grange. "We will review the application to see that it meets the requirements as outlined in this Order and transmit it to the Director-General of ODPEM (Office of Disaster Preparedness and Emergency Management."

Grange further stated that "If the ODPEM is satisfied, after consultation with the Ministry of Health, that the venue is appropriate, and that sanitization, mask-wearing, and distancing protocols will be strictly observed, then the ODPEM will approve the application for the specific training and/or competition to take place at the specified place and time. This is the process and we all must follow this process.”

“We knew that a lot of eyes would be on us since this was the first physical sporting event to be approved since the green light was given for the resumption of sporting activities.”

There were eight wheelchair participants and they were the first on the race route at 6:55 am, followed by the men's group at 7:00 am and the women's at 7:45 am.

At the start, there were different rows of four participants each staying six feet apart to observe the COVID-19 protocol. A seven-foot gap also separated each row of competitors.

Participants had to arrive at the start wearing a mask. However, the wearing of a mask during the race was optional. All participants were required to wear a mask once they crossed the finish line.

Francis said the approval given for the Sagicor Sigma Run Invitational means that there is now a template for others to follow.

“We at Running Events are willing to share this template with other sporting bodies and work with them to get their events approved based on the experience we have gathered during the process,” said Francis. “The template may need some tweaking based on the sport,” he added.

Jozanne Harris of Jamdammers Running Club was the first woman to cross the line in 23 minutes and 31 seconds.