Michalia Irish, an 18-year-old graphic design student, currently attending Ashworth College, has been awarded the top prize in Sagicor General’s recently concluded “Home is Where the Heart is,” Art Competition. The young Antiguan, who has been a creator of art since she was a child, was adjudged the winner by the Sagicor General Judging Committee. She also earned the People’s Choice Award based on the public’s input via social media.

In September of 2021, Sagicor General Insurance Inc, launched the competition in Antigua and Barbuda, Barbados, Dominica and St Lucia. Sagicor General’s President and CEO, Keston Howell, explained why they decided to launch the initiative: “Our team brainstormed this idea while we were about a year into the pandemic. We had all been working from home, or in a hybrid environment, and for much of us the focus had been about how do we survive and move forward. Given that there were so many unknowns, we wanted to give our creatives the opportunity to artistically express their vision of the future in a post-Covid-19 Caribbean.”

Howell further explained how the competition was organized, “The art competition was centered on three categories: Re-imagine, I am a Change Agent and Grow Together. We accepted submissions in the form of drawings, graphics/illustrations and paintings. The submissions were judged by a small committee comprising Sagicor team members and art enthusiasts, following which the top three submissions were posted on our social media platforms and subjected to a public voting process for the People’s Choice Award. The top piece from that process was adjudged the overall winner.  In addition to receiving a cash prize, we agreed to unveil and display the artwork in a space where the public could visit and view the winning piece. In Antigua the public will see Michalia’s work on Factory Road.”

He added, “Instead of having one overall Caribbean winner, we wanted to highlight a winner in each country, noting that each country’s identity is unique, and therefore the artists would have interpretations of the themes that were specific to their experiences.”

In the first phase of the competition, the company received several submissions from artists of all ages and in various types of media. In Antigua and Barbuda the top three places went to Michalia Irish, Rhonda Williams and Abigail Adams. All three winners saw their artwork posted on Sagicor General’s social media pages.

Remarking on her win, Michalia is earnest and clear on her values and objectives which are well transmitted in her art. She recounted that she has always been an artist and remembers using her parents’ stationery and other items as a child to draw, paint and create pieces. As she got older, her passion for environmental issues and recycling increased and she tended to enter competitions that blended her interests of art and repurposing, reusing and recycling. She said, “When I entered, I never thought I would win, and it was my brother who called me on the phone to tell me. Even my art teacher called to congratulate me, so I was very happy to see that others were proud of me. I’m so grateful to be selected as the first place winner for Antigua and Barbuda.”

Michalia, who is the last of four children indicated that her parents Michael and Julia Irish always supported her love for art and once they realized she was serious would ensure she had sketchbooks and art supplies.

Michalia explained her winning piece which was inspired by the theme, “I am a Change Agent.” “In this artwork I wanted to show the different ways to help our planet and also different ways we can reuse, reduce and recycle the things we use. In the middle of my artwork I have a girl turning trash into a fashionable outfit which has been upcycled while holding a reusable shopping bag to cut down the usage of excess plastic. In the top left hand corner, I also wanted to include and bring to light, the effects of food wastage all around the world as with food wastage it produces methane into the air which causes greenhouse gases even stronger than carbon dioxide. I created this piece using acrylic paint, watercolors and markers.” 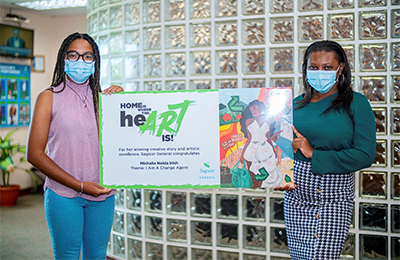 Michalia Irish, Winner of the Home is Where the HeART Is art competition, with her prize-winning artwork, sharing a moment with Sagicor General’s Accounting Assistant, Deidre George.